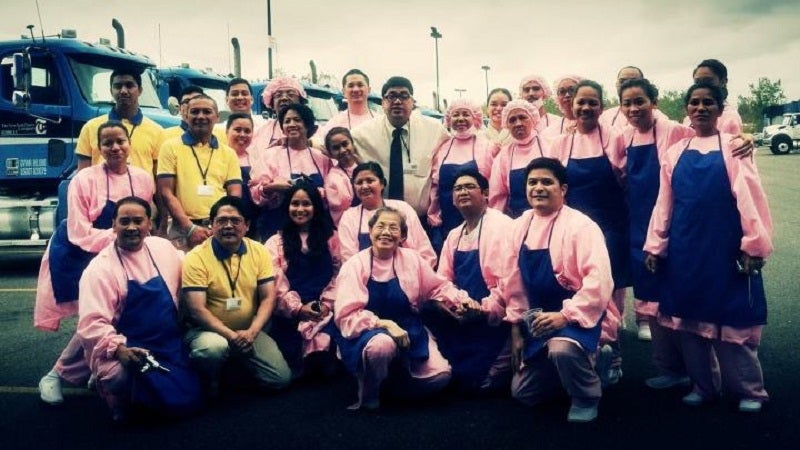 FilAms cast as factory workers. Luis Pedron is second from left in front row wearing yellow shirt. Photo by Troi Santos, who is also among the performers together with his wife Mapet Santos, Victor Palmos and Richard Reyes.

Who coulda known? That just days after he rented the “Bourne Trilogy” on Netflix, Luis Pedron would get a casting call for him to appear in “The Bourne Legacy.” Luis would get to play two roles, that of an airline passenger and a factory supervisor.

“I believe in the Law of Attraction,” said Luis, himself an indie filmmaker and a film festival organizer. “I rented the ‘Bourne Trilogy’ and watched all of them. I was surprised to be on the Bourne set only a few days after that.”

“The Bourne Legacy,” directed by Tony Gilroy, is the fourth in a series of Bourne thrillers written by Eric Van Lustbader. About 40 percent of its scenes were filmed in the Philippines, with a cast of stars that included theater actress Madeleine Nicolas.

In New York where the filming continued, the production would cast more than 50 Filipinos in small roles. Luis recounted to The FilAm how he got a call from Grant Wilfley Casting inviting him to be part of the group of Filipino actors “acting as if we were flying with Jeremy and Rachel Weisz to the Philippines.”

When he thought that was the end of his several minutes of fame, Luis got a call again from the same casting agency. He was told about a big factory scene that required about 400 people, more than 50 of them Filipinos. In this particular scene inside the New York Times printing plant in Flushing, Queens, Luis – with his stern, bespectacled Filipino-Chinese look — was cast in the role of a factory supervisor.

For the supervisor role, about 15 actors – a mix of Filipino and Chinese performers — were selected.

“But we all looked Filipino. We had a separate fitting day at Kauffman Astoria Studios in Long Island City,” he said.

Since Grant Wilfley knew Luis was active in the Filipino community in New York and that he spoke Tagalog, the agency enlisted his help in calling for more Filipinos in the cast. Luis looked no further than his coterie of close friends.

“I got to recommend fellow Filipinos to be on the set for the big factory scene. I was also assigned to be the official Filipino interpreter on set. Feeling ko UN interpreter ako,” he let out a chuckle.

Luis is no stranger to acting in Hollywood movies. He’s been a Screen Actors Guild member since 1998. The union has merged with the American Federation of Television and Radio Artists and is now known as

Sag-Aftra, which continues to negotiate working conditions and wage agreements between its members and production companies.

Winick); as Chinese soldier in “Strip Search” (directed by Sidney Lumet); as ensemble prison dancer in Michael Jackson’s “They Don’t Care About Us” (directed by Spike Lee); and in scenes in the soon-to-be- released films: as 12-Step treatment participant in “Thanks for Sharing” (directed by Stuart Blumberg), as English professor in “Admission” (directed Paul Weitz) and as Wall Street broker in “The Wolf of Wall Street” (directed by Martin Scorsese).

“I’m used to being in a Hollywood set,” continued Luis.

Doing “Legacy,” the cast was on set at about 3 a.m. almost every time.

“We went directly to wardrobe to wear our costumes before eating breakfast. It was harmoniously orchestrated by a lot of assistant directors and staff on set. The atmosphere was ‘Hurry up and wait.’ That’s the Hollywood mantra.”

More on his experience: “As professional actors we are trained not to take pics, ask for autographs of the lead actors nor talk to them.

Because they might be concentrating on their roles. Director Tony Gilroy was very hands-on on set. He was very meticulous. It was a Hollywood set, even though it was shot on film, there were lots and lots of takes.”

Luis said it was “truly memorable and a blessing” to be working with his closest friends on set. “I miss cabbing with Troi and Mapet Santos, Victor Palmos, etc. early in the morning and eating with my Filipino people during the wonderfully catered lunch. Galing talaga.”

Pedron said he was paid almost $2,000 for the five-day shoot.

“I am so proud of the Filipinos on set, always punctual and so patient. There were a lot of waiting and a lot of working on set too.

Especially because we had early call times every day and long hours.

Looking back, Luis cracked that maybe he should start watching the James Bond films, hoping to be hired in the same serendipitous way.

“Wow, it will be truly a dream come true.”

“The Bourne Legacy” will be in theaters on August 10.