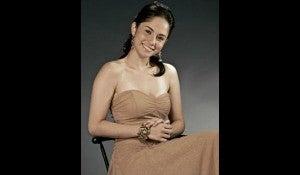 That was how young actress Jessy Mendiola described the actor, who is being romantically linked to her.

“He’s actually special not just to me, but to the people around him,” Jessy clarified. “I don’t want to rush things. It’s better that whatever we have now—our friendship, him being a suitor and me being his friend— I would like to keep it that way first.”

The 19-year-old discussed the relationship during a recent media gathering for her newest film, “The Reunion,” at the ABS-CBN studios in Quezon City.

She said: “First, people claimed JM was already my boyfriend, then they said we had broken up. Now they’re saying we’ve gotten back together. I don’t know where these rumors are coming from.”

JM, on the other hand, has been very vocal about how much he cares for the actress. “I’ve read write-ups of him speaking about his feelings for me,” Jessy said. “I feel very flattered and happy.”

The actress added: “If I were to describe him in a word, I’d say he’s very passionate. I also know JM to be very honest. I guess that’s why he is able to make these comments about his feelings publicly. That’s so brave of him. It’s kind of embarrassing.”

Asked to describe her ideal guy, she said: “Every girl wants a guy who is understanding and kind. As for the physical attributes, I can fall in love with a guy who is either moreno or tisoy—it really depends …. Right now, I’m prioritizing work.”

In “The Reunion,” Jessy plays girl-next-door Ali, who is secretly falling for her best friend Lloyd (Enchong Dee). Ali keeps her feelings bottled up and Lloyd ends up falling for someone else.

The coming-of-age comedy flick follows the adventures of Lloyd, Bogs (Enrique Gil), Pat (Kean Cipriano) and Joax (Xian Lim) as they struggle to pursue their passion for music and other life goals after high school.