Neophyte entertainer is attracted to both men and women. SS has been quite vocal about her designs on Hunky Colleague, but a reliable mole told Rushes that SS once had a same-sex romance.

Spy insisted that, as a kid, SS had a troubled home life. Rebelling as a teen, SS hooked up with a gay woman.

SS need not fret, though, because HC had his own close encounters with the third kind in the past.

Pretty Starlet must be fed up with the incessant calls and reminders from the Influential Mentor of her Cute Partner.

Overbearing IM kept insisting that CP and PS turn their reel romance into a real affair.

PS got turned off big-time, especially since persistent rumors link CP with IM. And before IM could raise a racket, PS found a new Onscreen Beau, leaving CP out in the cold.

There is another kind of meddling third party.

FM doesn’t believe her daughter has a future with DM, who is much too childish. FM has her sights on Hunky Actor for PS, instead.

Mom predicts that PS’ career will zoom to the top if she hitches her wagon to fast-rising HA.

Oh, she’s a fortune-teller, too?

Boys on the side

Handsome Hunk has turned to the oldest profession, which is proving to be a lucrative sideline. Unlike other pros who charge in pesos, HH asks to be paid in dollars—possibly because he does this only abroad?

Everyone thought Veteran Hunk had retired from the flesh trade, especially since he now occupies a respectable position in society.

But it’s hard to teach old dogs new tricks, as they say. VH has just found a new steady benefactor in Wealthy Gay.

ALYSSA Alano has a wish.

Alyssa Alano’s birthday wish: “Sana ’di na kami bahain!” (You could wish that on everyone, you know.) 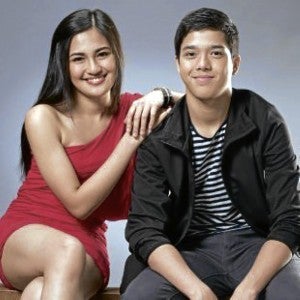 Zsa Zsa on coping with Dolphy’s death: “A lot of people advise me to take it one day at a time kasi iba-iba ’yung mga araw, eh. May mga araw na talagang ni hindi ka iiyak, tapos may mga araw na sobra ang iyak mo … Meron days na in denial talaga ako. Sinasabi ko, ‘Why did you leave me?’” (Or you can look at it another way: He’s there all the time now, and in equal parts as well, for every single loved one.)

DANIEL Padilla: “I don’t own Kathryn.”

Vic Sotto, asked if he’s running in the 2013 elections: “Diyan sa Quezon Memorial Circle!” (Sounds like a “no.”)

Julia Montes, asked if Enchong Dee has a shot at her: “Boyfriend-material naman siya. May pag-asa!” (Honesty! How refreshing!)