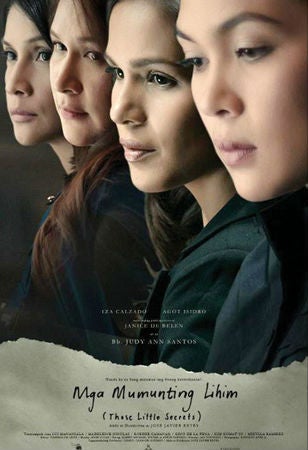 Iza Calzado, Judy Ann Santos, Janice de Belen and Agot Isidro earned the best performance awards, both for the lead and supporting roles, in Jose Javier Reyes’ “Mga Mumunting Lihim,” a drama on how the secrets of four women best friends were revealed through a diary.

The heavy downpour on Sunday night failed to dampen the spirits of cineastes and participants of the 8th Cinemalaya Philippine Independent Film Festival who trooped to the Main Theater of the Cultural Center of the Philippines in Pasay City for the closing ceremonies of the 10-day festival.

The program started 45 minutes late than the 7 p.m. schedule to give way to those who were stuck in traffic but the annual event that celebrates the work of indie filmmakers was well-attended.

A film on police brutality and a tale of death and family relationships topped this year’s Cinemalaya.

Honored in the directors showcase category were Lawrence Fajardo’s “Posas,” which tackles corruption and violence in the police force. Fajardo brought home P300,000 for topping the category that features works of established filmmakers.

Mes de Guzman’s “Diablo,” which explores the concept of family and the dichotomy of good and evil, won P200,000 for topping the new breed, or first-time directors, category.

Fajardo thanked the Cinemalaya organizers for giving him the opportunity to live his dream of being a filmmaker, having won his first award—the Special Jury Prize for his short film “Kultado”—at the independent film fest in 2005. The film also won a Gawad Urian the same year for best short film.

“This is where I established my career. This is where I made a name for myself,” the filmmaker, speaking in Filipino, noted in his acceptance speech.

Jarell Mahimay Serencio’s “Victor,” a story about a man who offers himself to be nailed on the cross during Holy Week, won the best film under the shorts category.

The best director awards were handed to Sheron Dayoc for his work in “As He Sleeps” (shorts), Raymond Red for “Kamera Obskura” (directors showcase) and De Guzman for “Diablo” (new breed).

“Even though people look down on directors of short films, I will continue making them because this was what started my career in filmmaking,” said Dayoc, whose short “Angan-Angan” won the Special Jury Prize at the 2008 Cinemalaya.

“Competition is good because it spices up a festival, it makes it more exciting, but what [is more interesting to note] is that we’re now reaching out to a bigger audience,” said Red, who dedicated his trophy to other competitors in the directors showcase category. “This is equally deserved by my colleagues.”

Eddie Garcia led the winners under the directors showcase category, winning the best actor award for his performance as Rene, an ailing gay man whose only companion is a stray dog in the Jun Lana drama “Bwakaw.”

Iza Calzado, Judy Ann Santos, Janice de Belen and Agot Isidro earned the best performance awards, both for the lead and supporting roles, in Jose Javier Reyes’ “Mga Mumunting Lihim,” a drama on how the secrets of four women best friends were revealed through a diary. Reyes was also awarded best screenplay for this film.

Art Acuña won the best supporting actor trophy for his role as a corrupt station police chief in “Posas.” He was the winner of the same award for Loy Arcenas’ “Niño” in last year’s Cinemalaya.

Diwa de Leon was the recipient of the best original music score trophy for his work in “Kamera Obskura,” while Vanessa de Leon took home the best editing trophy for “Mga Mumunting Lihim.”

Ama Quiambao led this year’s winners in the new breed category, bagging the best actress award for her role as Lusing, a woman convinced that her dead husband visits her each night, in the movie “Diablo.”

Quiambao thanked director De Guzman for the challenge and inspiration. “You are such a great writer. You gave me a lot of room [to develop my character]. I have a paranormal relationship with my radio that doesn’t allow me to sleep. Tonight, I will go home and sleep happily [because of this award].”

Kristoffer King, who was heralded best actor, was a no-show during the awards ceremony. He was commended for his performance as Abet, who operates a fake wake and runs a sakla (illegal gambling game) operation, in Paul Sta. Ana’s “Oros.”

Joross Gamboa was given the best supporting actor trophy for his role as a jeepney driver and best friend of the lead character in Lem Lorca’s “Intoy Siyokoy ng Kalye Marino.”

Tristan Salas won the best cinematography award for his work in “Diablo,” while the best editing honor was shared by John Wong and Rona delos Reyes for Gino Santos’ “The Animal.”

The Netpac (Network for the Promotion of Asian Cinema) awards were given to Lana’s “Bwakaw” (directors showcase) and De Guzman’s “Diablo” (new breed).

The Cinemalaya finalists will be screened at the University of the Philippines Film Center’s Cine Adarna in Diliman, Queon City starting Wednesday.