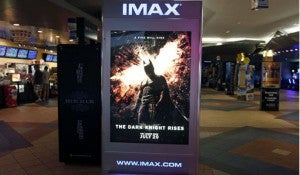 A sign for movie The Dark Knight Rises is displayed Regal Cinemas at Crossgates Mall in Albany, N.Y., on Friday, July 20, 2012. A gunman in a gas mask barged into a crowded Denver-area theater during a midnight premiere of the Batman movie on Friday, July 20, 2012, hurled a gas canister and then opened fire, killing 12 people and injuring at least 50 others in one of the deadliest mass shootings in recent U.S. history. (AP Photo/Mike Groll)

NEW YORK— Director Christopher Nolan expressed sorrow and devastation Friday as the movie industry struggled with the deadly Colorado shooting at a midnight screening of Nolan’s “The Dark Knight Rises,” one of the most anticipated films in years now enmeshed with a horrifying tragedy.

“I would like to express our profound sorrow at the senseless tragedy that has befallen the entire Aurora community,” Nolan said in a statement on behalf of the cast and crew. “I believe movies are one of the great American art forms and the shared experience of watching a story unfold on screen is an important and joyful pastime.

“The movie theatre is my home, and the idea that someone would violate that innocent and hopeful place in such an unbearably savage way is devastating to me.”

The shooting in an Aurora, Colorado, movie theater, reverberated through Hollywood and upended carefully laid plans for the global release of “The Dark Knight Rises.” Warner Bros. quickly canceled a premiere planned for Paris and canceled press interviews in France.

“Warner Bros. and the filmmakers are deeply saddened to learn about this shocking incident,” read a statement from Warner Bros. “We extend our prayers and deepest sympathies to the victims, their loved ones and those affected by this tragedy.”

New York City’s police commissioner said he was told the gunman had painted his hair red and called himself the Joker — Batman’s nemesis — but Aurora police would not confirm that.

The studio rushed to react to the tragedy. Dan Fellman, head of distribution for Warner Bros., said he had been up since 4 a.m. making calls.

“Everybody is very saddened by the event. We were obviously looking for a very happy occasion for us,” Fellman said. “It’s a difficult way to begin. We’re just more concerned now with the well-being of those that were injured, of course.”

Warner Bros. had no further comment on whether screenings might be canceled or precautions taken. The studio did take the unprecedented step of delaying its reporting of eagerly awaited weekend box office figures for “Dark Knight” from Sunday to Monday “out of respect for the victims and their families.”

Warner Bros. also moved to pull trailers for its upcoming movie “Gangster Squad” from showings of “The Dark Knight Rises.” The trailer of the film, which stars Sean Penn and Ryan Gosling in a ruthless war between ’40s Los Angeles police and the mob, includes a scene of mobsters firing into a movie theater from behind the screen.

A person familiar with what was shown at the Aurora theater said the trailer did not play there. The person did not want to be identified because the person was not authorized to speak on the matter.

Cinemark Holdings Inc., the chain that owns the theater where the shooting happened, said it was working closely with local law enforcement. “Our thoughts and prayers are with the victims, their families and loved ones, our employees, and the Aurora community,” the company said.

Movie theaters around America continued Friday showings of the film as planned, though some were stepping up security and conducting bag searches. New York police commissioner Raymond Kelly said the city was providing extra security in New York theaters playing “The Dark Knight Rises” ”as a precaution against copycats and to raise the comfort levels among movie patrons.”

In the wake of the shooting, “The Dark Knight Rises” and the earlier Batman films, with their dark themes and emphasis on terrorism, were sure to be heavily scrutinized. The practice of midnight screenings for eagerly anticipated blockbusters, too, could come into question.

Kelly said that the suspected gunman, James Holmes, had his hair painted red and identified himself to authorities saying he was the Joker. Heath Ledger played the Joker in the previous Batman installment, “The Dark Knight,” although his hair was colored green. Ledger died in 2008 from a toxic combination of prescription drugs before the film was released.

The National Association of Theatre Owners issued a statement offering their “hearts and prayers” to the victims. The association said, “Guest safety is, and will continue to be a priority for theater owners,” adding that the group would work closely with law enforcement and review security procedures.

“We share the shock and sadness of everyone in the motion picture community at the news of this terrible event,” said former Sen. Chris Dodd, chairman and CEO of the Motion Picture Association of America. “We extend our prayers and deepest sympathies to the victims, their loved ones and all those affected by this tragedy.”

“The Dark Knight Rises” had expectations of being one of the biggest weekend openings ever. Its midnight screenings earned $30.6 million, Warner Bros. said Friday. That’s the second-best midnight opening ever, behind $43.5 million for the “Harry Potter” finale. “The Dark Knight” earned a then-record $158.4 million in its first three days, including $18.5 million from midnight screenings.

The PG-13 film played in 3,825 theaters domestically in the midnight screenings, expanding to 4,404 cinemas nationwide Friday. Many showings on the weekend were sold out in advance.

Paul Dergarabedian, an analyst for Hollywood.com who specializes in box office, declined to speculate on an effect the tragedy might have on the film over the weekend, saying it was too soon to estimate. But some moviegoers were already rethinking their plans.

Christine Cooley, who works for the University of Florida at a campus facility near Tampa, Florida, said she and her 15-year-old daughter were stunned by the TV coverage of the shooting Friday morning.

“Her immediate reaction was ‘I’m never going to the movie theater again. Why should I go somewhere where I’m looking over my shoulder worrying that someone is going to come in and harm us when I can wait six months and watch it in the safety of my own home?'”

Cooley said she tried to explain to her daughter that it was an isolated incident, “but I see where she’s coming from. Why put yourself in harm’s way?”

“Just seem like another day at the movies,” said Jimmie Baker, 40, of Harlem, New York, at a theater in Times Square.

Andrew Bross, 22, of Livingston, New Jersey, returned Friday to watch “The Dark Knight Rises” for the second time in 12 hours.

Damon Lindelof, the co-creator of “Lost,” said he was going to see the film Friday night and suggested a modest tribute: a minute of silence as the end credit roll.