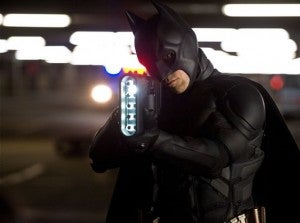 This undated film image released by Warner Bros. Pictures shows Christian Bale as Batman in a scene from the action thriller “The Dark Knight Rises.” A gunman in a gas mask barged into a crowded Denver-area theater during a midnight premiere of the Batman movie on Friday, July 20, 2012, hurled a gas canister and then opened fire, killing 12 people and injuring at least 50 others in one of the deadliest mass shootings in recent U.S. history. (AP Photo/Warner Bros. Pictures, Ron Phillips)

The Oscar-nominated filmmaker, who canceled the French premiere of the final part in the Batman trilogy and a media junket in Paris after the shootings, said the “innocent” place he calls his “home,” the cinema, had been violated.

“Speaking on behalf of the cast and crew… I would like to express our profound sorrow at the senseless tragedy that has befallen the entire Aurora community,” Nolan said, referring to the town where the killings occurred.

“I would not presume to know anything about the victims of the shooting but that they were there last night to watch a movie,” he added.

A further 59 people were wounded in the attack.

British-American Nolan is director of the trio of Batman movies that started with “Batman Begins” in 2005 followed by “The Dark Knight” in 2008. “The Dark Knight Rises” is the final installment.

He also wrote and directed 2010 thriller “Inception,” which won four Oscars and was nominated for four others. Nolan was also nominated for best screenplay Oscar in 2002, for “Memento.”

“I believe movies are one of the great American art forms and the shared experience of watching a story unfold on screen is an important and joyful pastime,” Nolan said.

“The movie theater is my home, and the idea that someone would violate that innocent and hopeful place in such an unbearably savage way is devastating to me.

“Nothing any of us can say could ever adequately express our feelings for the innocent victims of this appalling crime, but our thoughts are with them and their families.”

Stars including Christian Bale, Anne Hathaway, Marion Cotillard and Morgan Freeman had been due to attend the premiere on the Champs-Elysees in Paris ahead of the film’s general opening in France on Wednesday.

But management at the Gaumont Champs-Elysees cinema, speaking on condition of anonymity, said the premiere had been scrapped.