Agot Isidro’s got the indie spirit 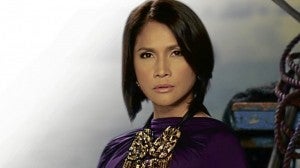 Agot Isidro is having the time of her life as a villainess in the GMA 7 soap, “One True Love.”

“You can play around more with bad girls,” she told Inquirer.

She described her character Leila as “smart” but obsessed with her husband (played by Raymond Bagatsing).

Fans may want to exact revenge for her maltreatment of the soap’s heroines, Louise de los Reyes and Jean Garcia.

FEATURED STORIES
ENTERTAINMENT
Cherie Gil, veteran actress, passes away at 59
ENTERTAINMENT
Cesar Montano’s 9 kids present at his 60th birthday bash
ENTERTAINMENT
Kylie Verzosa on Herlene Budol: I would have loved to see her win a crown

“I’ve slapped Jean and Louise. I wonder who’s next on my list,” she jested.

Agot continues to pursue her other passion, acting in independent films. This year, she is in the cast of the woman-powered ensemble of Jose Javier Reyes’ “Mga Mumunting Lihim,” an entry in the Directors’ Showcase section of the Cinemalaya, which opens today.

“Making indie films is refreshing,” she said. “Some indie filmmakers are afraid to approach mainstream artists, but I’m always game. Indie movies would benefit from the services of trained professional actors. On the other hand, mainstream actors would get the chance to play challenging roles.”

It’s a win-win proposition, she noted.

She recalled that shooting “Tulad ng Dati” was a blast. “I’m friends with [the rock band] The Dawn and the movie was about them.” In “Huling Biyahe,” she consented to do a love scene shot in a cramped car.

In “Mumunting Lihim,” she unleashes a number of f_ _ _ words as a “complicated” and “unsympathetic” woman.

“My character Sandra is very real,” she said. “Direk Joey told me to think of true-life women as pegs. I can’t reveal who they are, though.”