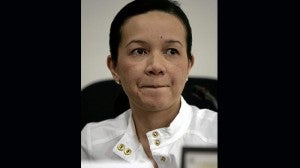 Aside from monitoring TV shows and films for sensitive content, the Movie and Television Review and Classification Board (MTRCB) is also on the lookout for bus operators that allow exhibition of adult materials in their vehicles, according to Board chair Mary Grace Poe-Llamanzares.

“We are pushing for preprogrammed content in public utility buses,” Llamanzares told the Inquirer on Tuesday.

The MTRCB chief said an agreement with the Land Transportation Franchising and Regulatory Board (LTFRB) was signed recently that would penalize bus companies showing sensitive materials.

“However, we have a little less than 15,000 buses in Metro Manila alone. Realistically, we are not able to monitor all these so we ask for the vigilance of the public,” she said.

Llamanzares added that her office has already sent “show-cause letters” to some bus operators and received a number of responses. “Each time they commit a violation, they have to pay P10,000—that’s a lot. Plus, there’s the hassle of hiring a lawyer. I think they’d rather be on the safe side,” she said.

Llamanzares also said the MTRCB has been working on a solution alongside Elvira Medina, president of the National Center for Commuter Safety and Protection (NCCSP).

“Her group’s suggestion was for bus companies to buy preprogrammed materials. She already brought some materials to the office for our approval,” explained the MTRCB chief. “Not only does this help fight piracy, it’s also income-generating. On the side of the bus operators, they can sell advertising spots.”

She added that government offices like the MTRCB, Department of Interior and Local Government (DILG), Optical Media Board (OMB) and the Metro Manila Development Authority (MMDA) could also place public service announcements of new projects that people should be aware of.

“This is so much better than putting pornographic or numbing violent movies for the long trip,” Llamanzares stressed. “Not all buses have these at the moment. Operators have to purchase them. This is a good start, since there have been a lot of buses already penalized.”

The MTRCB chief, however, encouraged the public to get involved. “We have to do our share,” she pointed out. “Someone told us, ’you’re making us do your job. You should just cut it (sensitive scenes) before you allow films to be shown.’ How about the other freedoms that we could curtail because of that?”

Llamanzares added: “Adults also have the freedom to watch within a certain limit. Producers and directors have the right to create. Society is not just made up of one group. You have to balance the interest of all. With the limited budget we have, we can only do so much.”