‘Man of Steel’ flies into Comic-Con with footage 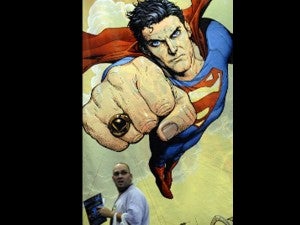 A convention goer walks past a poster of Superman during the 2010 New York Comic Con at the Jacob K. Javits Center in New York City October 8, 2010. New York Comic Con, which runs through the weekend, is the largest pop culture event on the East Coast, hosting the latest in comics, graphic novels, anime, manga, video games, toys, and movies . AFP PHOTO / TIMOTHY A. CLARY

SAN DIEGO – There are lots of people dressed like Superman at Comic-Con, but the real guy — or at least the actor playing him in the latest Superman film — made a surprise appearance at the fan festival.

“Man of Steel” director Zack Snyder presented new footage from the film on Saturday and introduced star Henry Cavill to an audience of more than 6,000 fans.

The British actor said “it’s a dream come true” to play the iconic superhero, but confessed “it is pretty intense.”

The footage showed Clark Kent as a boy and Cavill in his super suit, along with glimpses of co-stars Amy Adams and Russell Crowe.

Snyder said the film will make Superman more relatable than previous depictions that showed him as “a big blue Boy Scout up on the throne and you can’t really touch him.”

“The big challenge, of course, is if you can make people feel, ‘What would you do it you were Superman? How would you feel?'” Snyder said. “How to make it personal, I think that’s the thing we went after.”

Snyder also hinted — but coyly refused to confirm — that General Zod might be the villain in the film, due in theaters next summer.

The trailer for “Man of Steel” is set to play ahead of “The Dark Knight Rises,” Snyder said. “Dark Knight” director Christopher Nolan served as a producer on “Man of Steel.”

But Snyder said it would be no contest if the two superheroes were ever to battle. The director of “300” and “Watchmen” called Superman the “king daddy of all superheroes.”

“I love Batman,” Snyder said. “He is awesome — like, literally awesome — but, really?”