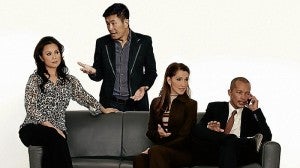 At last, we are here, our official preview night of “God of Carnage” before an unsuspecting audience.

Well, perhaps only partially unsuspecting. Because a film version came out not too long ago, much of the action taking place won’t be a secret. However, the film wasn’t widely released in the Philippines, which means most of those who have seen it, did so via DVD or iTunes. Thus, much of what happens will hopefully remain unknown to most of our audiences.

I always look forward to the first night that we perform in front of a crowd. Rehearsing a play, musical or even a concert in a studio feels like you’re stuck in a vacuum. We’re doing line after line, song after song, with feedback coming only from our director, musical director or whoever else happens to be in the room with us.

We have no idea where the punch lines land, how the visual jokes will fall, if a song works in sync with the others that come before and after it. Everything is up in the air, until it’s in a room with a sizable crowd.

We are cursed with such short runs in Manila. Menchu Lauchengco-Yulo, considered the Philippines’ first lady of musical theater (a well-deserved title), has lamented that you’re only truly ready when a Manila run ends, which is usually three to four weekends.

In the West End or Broadway, there is the requisite preview period when elements of a show are tried out in front of an audience to see if it works or not. Previews customarily last about three weeks, but there is one show running on Broadway that defied convention: “Spider-Man: Turn Off the Dark” had a preview period lasting over seven months, amid many changes in personnel, both on and off the stage.

A preview period gives everyone involved in a production the opportunity to work out as many kinks as possible before the official opening night.

In the original West End production of “Miss Saigon,” our first preview was scheduled for Sept. 4. However, at our final dress rehearsal, technical issues that threatened an actor’s safety came up: the Ho Chi Minh statue’s cable had jumped a drum, allowing it to roll forward farther than it should have. One actor nearly had her ankles pinned between the statue and another piece of scenery that was already set in front of it. Panic briefly ensued before the actor, Shukubi Yo, was taken out of harm’s way.

A meeting was called after the incident to inform the actors that the rest of that evening’s final dress rehearsal was being called off in order to address what had gone wrong and correct it posthaste. A chain was installed as an additional safety measure, to stop the statue at a certain point. It would not be able to roll farther than intended, ever again.

Our first two previews were also canceled to give us time to troubleshoot any more safety issues that might come up in the future. On Sept. 4, a Monday, we had to check and recheck each set piece cue as it was called.

We’d stop when trouble came up, fix the problem, reset that cue and start again. Needless to say, it was a long night at the theater. The following day, we had our final dress rehearsal, which went off without a hitch.

Finally, the day after, “Miss Saigon” had its first preview and was given a rousing standing ovation at the end.

But something happened on the second preview. Early in the evening, the show had to stop—we were actually experiencing technical difficulties. I was later told  that a preview audience seems to expect something to go wrong before opening night (and enjoys it).

If I remember right, we didn’t have too many nights like these, except on one other night when Jonathan Pryce had to sit out one preview due to vocal problems—allowing his understudy, Nick Holder, to actually perform.

On that day, there was an emergency rehearsal called to allow Nick to be properly, though hurriedly, included in the show as The Engineer. He gave a stellar performance.

But going back to “God of Carnage” …

Tonight will be the only preview we’ll have, our first crack at performing this piece in front of an audience. Until tonight, we’ve rehearsed the show in front of the production staff and a handful of colleagues whose feedback has been nothing short of invaluable.

But still, wonderful though it has been hearing them react and respond, it’s not a full audience. None of us four in the cast (Menchu, Adrian Pang and Art Acuña) has any idea how a line reading will go in front of 450 or so people.

We don’t know when to hold for a laugh if one comes, or for how long. This is one element that will, with every performance, change the way we do whatever it is that we’ll be doing onstage. In every show, there will be an element of the unknown.

We know that script backwards and forwards … we’ve run through the whole play at least 10 times, its internal rhythms and tempos changing with each go (Bobby Garcia, our director, called one of the runs “Kafkaesque,” coinciding with a particularly dark and dreary afternoon).

We’ve figured out just about everything, individually or collectively. We’ve discussed, argued, tried things, thrown things out, laughed, cried, given dirty looks and uttered dirtier words. But, until tonight, only with one another. Now, it’s time to get the crowd in and see what happens.