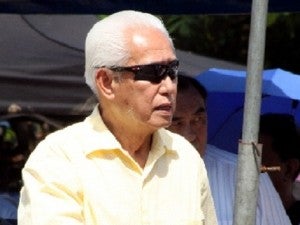 MANILA, Philippines–Philippine flags at schools and government offices in Manila were lowered at half-mast as a sign of mourning and respect to the late comedian-actor Rodolfo “Dolphy” Vera Quizon, the city mayor said Wednesday.

Speaking to reporters after visiting Quizon’s wake at the Heritage Park in Taguig City, Manila Mayor Alfredo Lim said he gave the order to honor Dolphy, whom he said, was his close friend.

Asked what he remembers of the country’s Comedy King, he said Quizon, 83, never harbored evil thoughts toward other people–only good things–adding that all he wanted was to make people laugh.

“This man doesn’t like to pretend……Whatever he says, he means from his heart,” Lim added.

One more thing, he said, was that Quizon never asked for what Lim termed as “molestya” even during simple meals.

“Whenever we meet, we eat out. Of course I would offer to buy him dinner but he will refuse. I would tell him, ‘I’m mayor already,’ but he would say, ‘ yes you’re the mayor but I earn more than you do. This in on me,’” he said.

“These kind of people are hard to find,” he said.

As to Dolphy’s aura, Lim said Quizon, who was confined in intensive care unit of Makati Medical Center for several weeks, looked “natural” in his full while suit.

“The people of Manila are also mourning because he’s a big loss,” he said.

A public viewing of Quizon’s remains, which rest inside a bronze casket that he bought for himself prior his passing, at the Heritage Park will be opened to the public from 8 a.m. to 3 p.m. starting Thursday to Saturday, before his “tentative” burial set on Sunday.