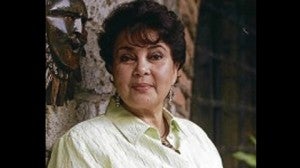 MANILA, Philippines — Former actress Amalia Fuentes and her son are facing a slew of complaints following a heated confrontation with two of their tenants last week in Quezon City.

In their affidavit, the couple claimed the incident happened in the afternoon of July 4 when Fuentes and Steven, with some policemen, went to the house the Licups were renting.

The complainants said they were renting the house at P25,000 for the past one and a half years.

At the time of the incident, the couple had just arrived home and saw Stevens standing outside the house with a pitbull.

The couple alighted from their vehicle so that they could talk to him but Fuentes’ son allegedly began shouting at them.

This prompted Peter to approach the actress and ask her to talk calmly if there was any problem.

Peter said he kept on asking the respondents what the matter was, claiming that Fuentes punched him in the face.

The complainant added that Stevens assaulted him, causing him to fall down as the respondents allegedly kicked and punched him.

Peter added that the police officers pulled him away from mother and son.

After the incident, the complainant went to the Ospital ng Maynila to have his injuries treated.

“The respondents, with obvious intent, confederated to inflict bodily harm against me until I would have been killed and would have succeeded in doing so as consequence of the mauling but nevertheless did not produce it by reason of them being separated from us by other persons, which is independent of the respondents’ will,” part of the affidavit read.

They added that being branded as thieves had injured their reputation as citizens in good standing and social standing as people engaged in business.

Meanwhile, a sergeant was arrested after he allegedly pointed his gun at Fuentes on Sunday afternoon.

Tee, the brother of Rosemarie Licup, underwent inquest proceedings at the Quezon City prosecutor’s office on Monday morning for charges of grave threats.

The sergeant was nabbed following the altercation that happened around 5 p.m. Sunday at the house the Licups have been renting from Fuentes.

Case investigator Senior Police Officer 1 Jigson Maddatu learned from Fuentes that she was at the St. Luke’s Medical Center that Sunday afternoon when she received a text message from her male househelp.

The houseboy claimed that the Licups were vacating the house and allegedly loading their belongings into a container van without Fuentes’ consent.

Fuentes then went to the Licups’ house as the couple allegedly owed her money.

The actress arrived in a Mitsubishi Pajero and parked parallel to Tee’s Hyundai Starex van.

The sergeant, upon seeing Fuentes, allegedly lowered the glass window of the Starex and showed his gun.

The actress fortunately had called for police help prior to her arrival, leading to Tee’s apprehension.