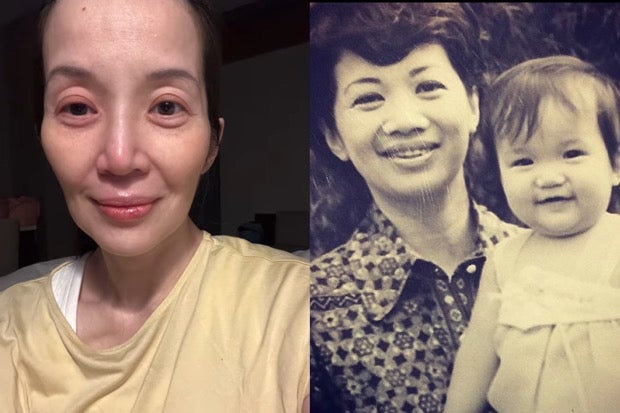 Kris Aquino paid tribute to her late mom, former President Corazon “Cory” Cojuangco-Aquino, through an open letter on what would have been her 90th birthday, wherein the Queen of All Media also disclosed that there was a “50% chance” of her having a sixth autoimmune disease.

The actress-TV host gave her mom as well as the public an update on her health, showing the bruises and redness of her skin caused by her condition in a video on her Instagram page on Wednesday, Jan. 25.

“Dear Mom, happy 90th birthday in heaven. I prayed about my decision on whether to show everyone what it’s been like because you never wanted anybody to know how difficult it was for you,” Kris wrote. “Mom, naaawa na ako kay ate [I feel sorry for my older sister] because it’s hard for her to explain why I’m still here [and] why treatment hasn’t started.”

Kris talked about her allergies to medicines and opioids which would make her endure a certain treatment without pain reliever back in May. While undergoing the said treatment, Kris had to be sedated as she could not tolerate the pain any longer.

“To clarify, the [four] conditions I have are chronic spontaneous urticaria, autoimmune thyroiditis, Churg Strauss Syndrome now called EGPA, and Crest Syndrome or Scleroderma,” she stated. “Seems from all my physical manifestations, I am highly likely to already have a 5th and there’s a 50% chance of autoimmune condition number six.”

Kris then shared that she and her children, Bimby and Josh, would celebrate Cory’s birthday by going to the “happiest place on Earth,” a trip she promised to her eldest son.

“I really pray kayanin ko [that I will be able to try] even just [five] rides so kuya will have happy memories during this whole ordeal,” she continued. “It’s because of the example you set that even when my deep bone pain is awful or my vascular urticaria is everywhere, I don’t complain.”

“I want kuya [and] bimb to see they are worth all the pain [and] discomfort because I know they still need me,” she added.

Kris then concluded her letter to her mom by describing the latter as “the best role model in the world,” noting that she’s “forever going to be proud to be Cory’s baby, and the mama of kuya Josh and Bimb.”

“You told me many times, I’ll only have a successful relationship if I find your male version. But with all I’ve been through, I finally see so much of you in me,” she said.

“What I’m trying to say mom is I’m no longer looking for someone to complete me. Finally realized the truth in what you’d always say to me: ‘Kristina, know your worth,'” she added. “Yes mom, I do.” 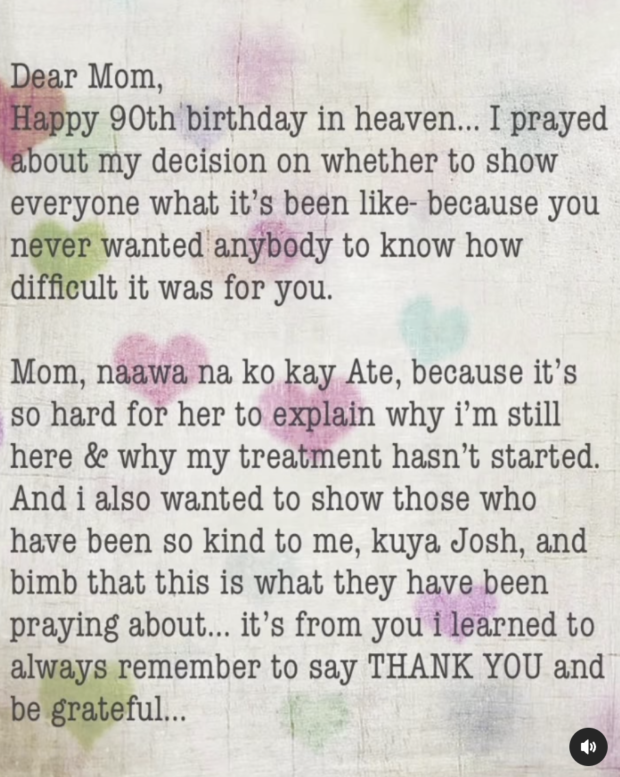 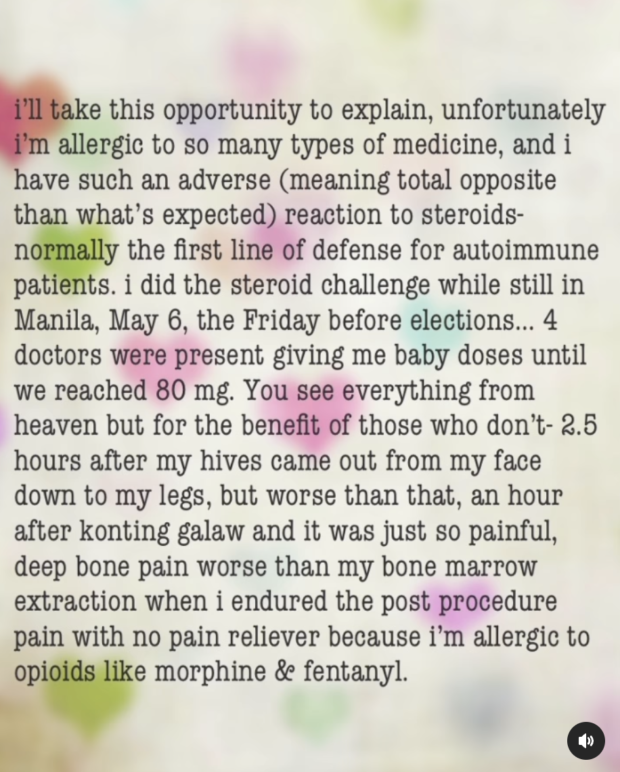 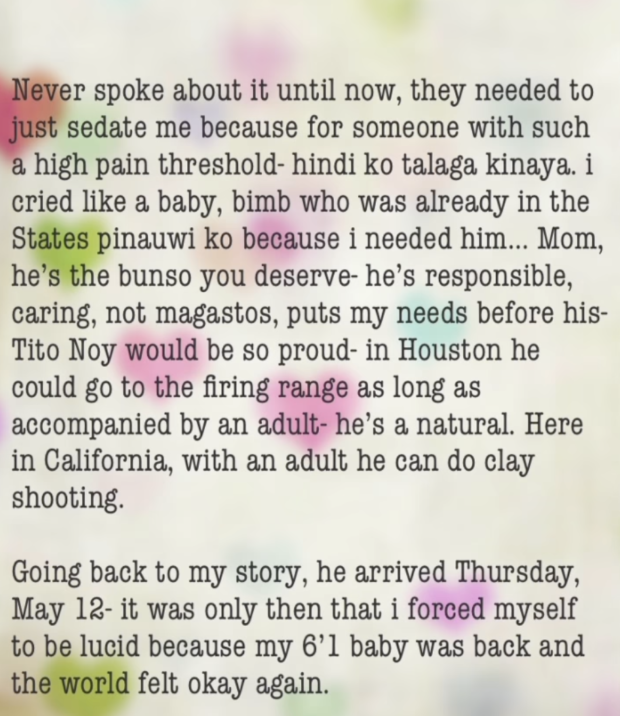 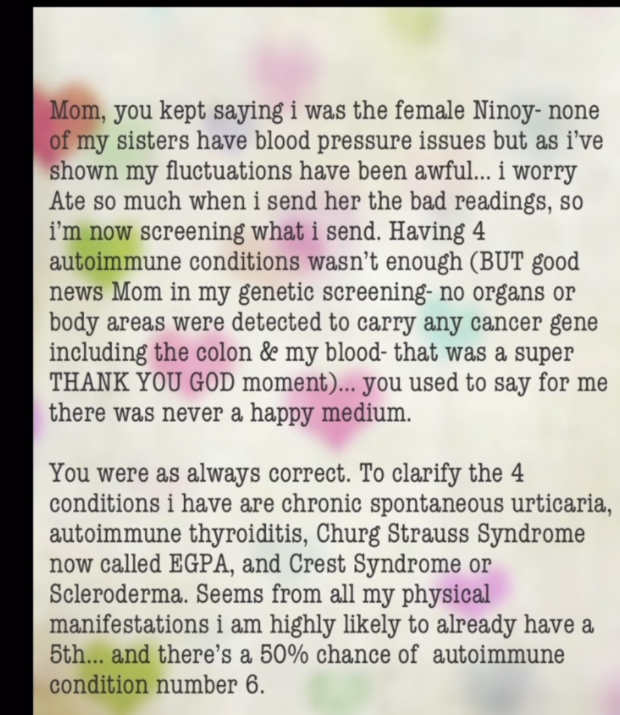 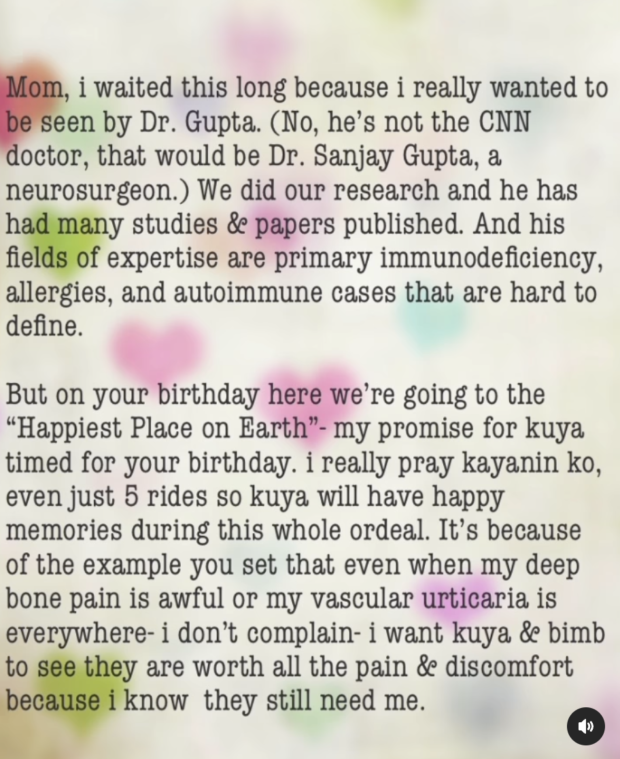 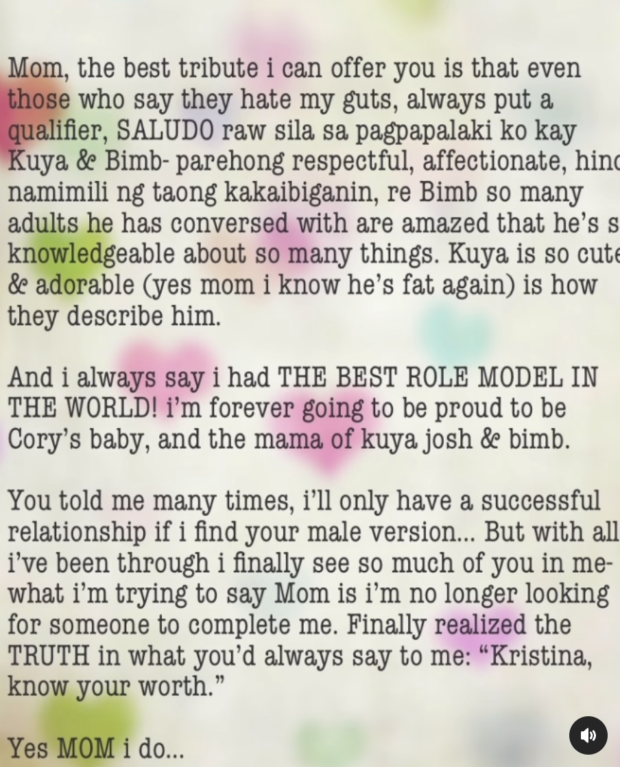 Birthday greetings to the former President and well-wishes for Kris from celebrities and netizens then poured in the comments section. 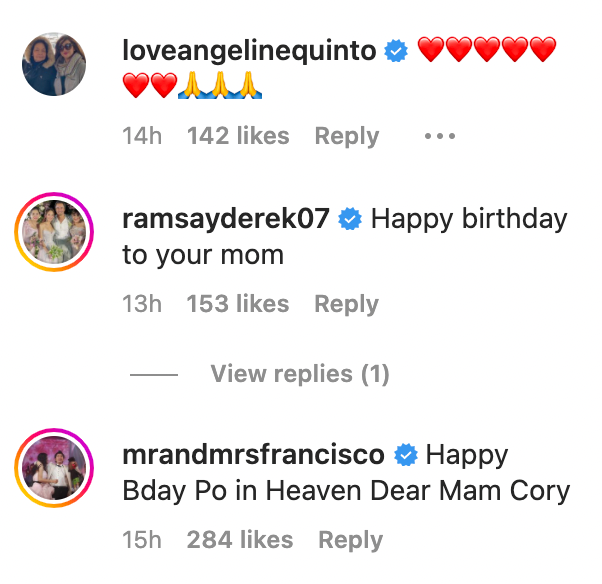 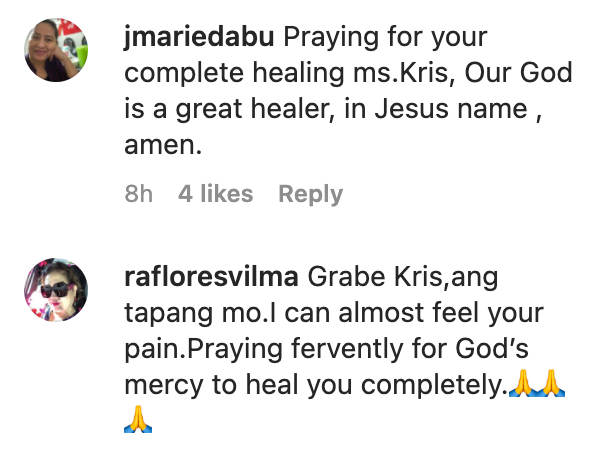 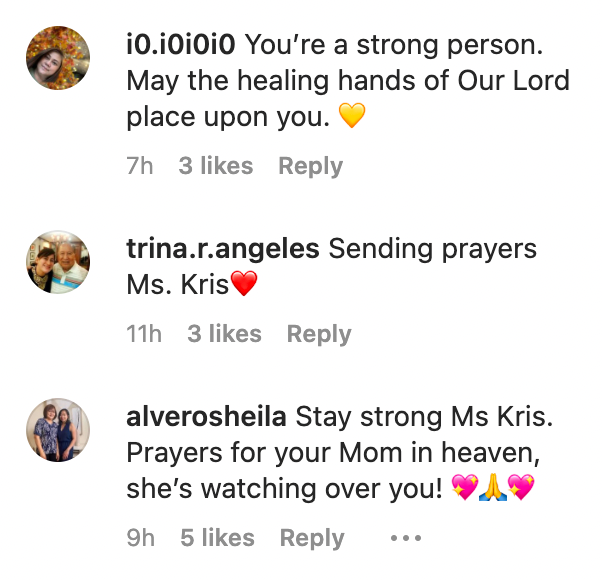 Cory, a key figure in the 1986 People Power Revolution, died in August 2009 after battling cancer. She and her husband, late former senator Ninoy Aquino, are both regarded as icons of democracy in the Philippines.

Kris, who is currently in  California for her medical treatments, disclosed earlier this month that she and Bimby would be undergoing confinement for their medical assessment.  /ra