‘The 1619 Project’ comes to TV with Oprah-produced docuseries 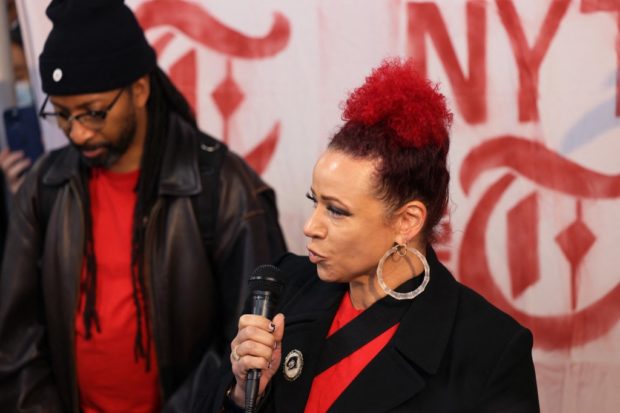 New York Times Magazine reporter and creator of 1619 Project Nikole Hannah-Jones speaks as members of the New York Times staff hold a rally outside of the New York Times headquarters as they participate in a strike on December 8, 2022, in New York City. The 1619 Project, which began as a New York Times essay series about the impact of slavery on United States history and became a lightning rod for intense political divisions, will launch a new television docuseries produced by Oprah Winfrey on Thursday, Jan. 26, 2023. MICHAEL M. SANTIAGO / GETTY IMAGES / AFP

LOS ANGELES, United States—”The 1619 Project,” which began as a New York Times essay series about the impact of slavery on United States history and became a lightning rod for intense political divisions, will launch a new television docuseries produced by Oprah Winfrey this Thursday.

The Hulu six-part series is fronted by journalist Nikole Hannah-Jones, who won a Pulitzer Prize for her work producing the original project—written mainly by Black scholars—including her own deeply personal introductory essay that viewed America’s origins through the lens of enslaved Africans.

Slavery is ingrained “in the very structure of our politics, our economic system, our medical systems,” Hannah-Jones told a recent Television Critics Association panel discussion about the series.

“These systems, because they were built into the foundation of our country, they replicate on their own, whether or not you are personally racist,” she said.

Two episodes will be released each Thursday, each based on different essays—”Democracy,” “Race,” “Music,” “Capitalism,” “Fear” and “Justice.”

They will follow “real stories, real people in real life who are experiencing challenges in each episode,” said director Roger Ross Williams.

“We got to work with Oprah, who was incredibly really involved in the development in the beginning and really passionate about it,” he added.

Showrunner Shoshana Guy said the television series would expand on the project’s writings through “listening to people and seeing their emotion on the screen.”

“The 1619 Project” takes its name from the year in which the first enslaved Africans were brought to mainland British America, and was launched by the New York Times on the 400th anniversary of that event.

Also spawning a podcast, a book and an educational curriculum for schools, it quickly became a favorite talking point—and punching bag—for Donald Trump, who during his presidency regularly mocked the series as “totally discredited” during rallies.

Some arguments put forth by the project, including a claim that the American Revolution was motivated by white settlers’ desire to keep slaves in the face of growing abolitionist sentiment in Britain, were publicly questioned by prominent scholars.

But Hannah-Jones said the backlash was “indicative of why the project had to exist in the first place—that we’ve all been indoctrinated into these myths about America and we’ve all been told a history that’s not true.”

“There are certain Americans who think, if this were true, certainly I would have heard about it before,” she said, adding that others reject the project for “strictly political” reasons.

“This project exposes power, exposes hierarchy, exposes that we were founded on lofty ideals of democracy and freedom and also the practice of slavery and what does that mean for the country that we live in today,” she said.  /ra

Trump downplays legacy of slavery in appeal to white voters

The US State Department Slavery Report: Did the Philippines Get the Right Grade?