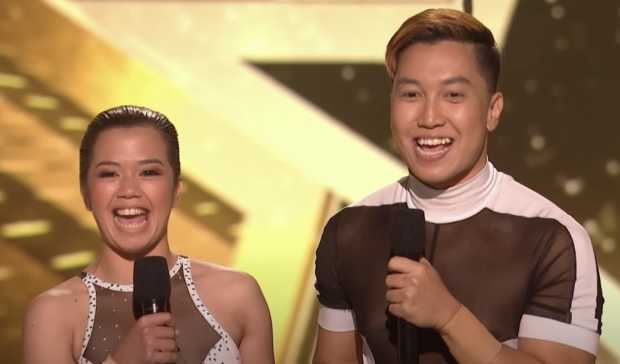 Power Duo, the Filipino contemporary acrobatic dance group that won “Pilipinas Got Talent” season 5 in 2016, secured a spot at the grand finals of “America’s Got Talent: All-Stars” edition after winning the super fans vote.

The duo, composed of real-life couple Jervin and Anjanette Minor, wowed the audience and show judges Simon Cowell, Howie Mandel and Heidi Klum as they danced to Calum Scott’s “You Are the Reason.” A clip of their performance can be seen on the show’s YouTube channel as posted on Tuesday, Jan. 24.

Power Duo bested two other contestants, Ndlovu Youth Choir and Darius Mabda. The three of them were among the contenders who got the highest super fans vote prior to the announcement of the grand finalists.

In a series of tweets on their Twitter page, Power Duo expressed gratitude to their supporters as well as “Pilipinas Got Talent” season 5 judges Vice Ganda, Angel Locsin, former ABS-CBN president Freddie M. Garcia (FMG) and actor-turned-politician Robin Padilla, who gave them a golden buzzer during the 2016 competition.

“We also want to share our success to our [‘Pilipinas Got Talent’] judges who really believe in our talent from the start,” the group said.

We also want to share our success to our Philippines got talent Judges who really believe in our talent from the start.

The couple also received compliments from Scott who thanked the group for “using [his] music to express art,” via Twitter as well.

Thank you so much❤️ and Thank you @calumscott for the wonderful song we love it so much…. #AGT #AGTAllStars #Powerduo https://t.co/2TnWhABsrg

Power Duo will be contending with “Britain’s Got Talent” 2020 finalist, magician Aidan McCann, who entered the final round after receiving a golden buzzer from Klum.