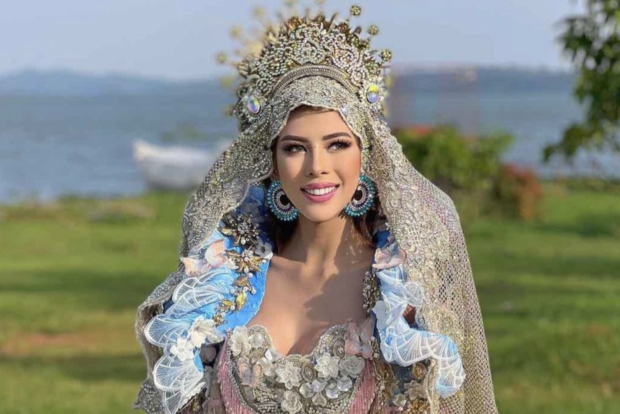 Herlene Budol has given the public a glimpse of the “Pearl of the Orient Seas”-inspired national costume she would have worn in Miss Planet International, weeks after she announced her withdrawal from the pageant.

The Binibining Pilipinas 2022 first runner-up looked stunning in a silver-and-blue layered gown by Marbin Garcia, paired with a gold crown-like headpiece and a sheer gold veil, as seen on her Instagram page yesterday, Dec. 5. The costume also features a big ball to symbolize the “Pearl of the Orient Seas,” according to Budol.

The dress was her “Plan B” after the costume she originally intended to wear was apparently damaged and misplaced on her way to Uganda for the pageant.

(This is the plan B national costume I would have worn in Uganda since Ethiopian Airlines damaged the first one we prepared, “Karitela ng Kalabaw” by Patrick Isorena.)

Budol’s manager Wilbert Tolentino announced last Nov. 11 that Budol had withdrawn from Miss Planet International due to “uncertainties” from the pageant’s organizers.

The 2022 edition of Miss Planet International no longer pushed through last Nov. 19 in Uganda, and will instead be held in Cambodia in January 2023.  /ra