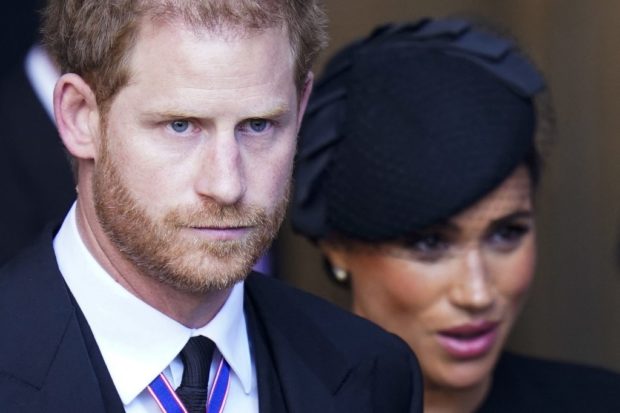 Britain’s Prince Harry, Duke of Sussex and Meghan, Duchess of Sussex leave after a service for the reception of Queen Elizabeth II’s coffin at Westminster Hall, in the Palace of Westminster in London on September 14, 2022, where the coffin will Lie in State. (Photo by Danny Lawson / POOL / AFP)

LONDON — A new Netflix trailer released Monday for an upcoming six-part docuseries on Prince Harry and wife Meghan risked further deepening their feud with his family, with the royal calling life within it a “dirty game”.

The British royal family is bracing for a potentially highly damaging account of the couple’s grievances that led them to quit frontline duties and move to the United States.

In the clips, posted on Twitter, Harry accuses the family of using the press to undermine them while one of the couple’s supporters calls it a tale of “hatred” and “race”.

The trailer opens with happy footage from the couple’s courtship, engagement and wedding, before Harry says “everything changed.”

“There’s a hierarchy of the family,” the former British army captain goes on to say of the institution.

“It’s a dirty game,” he concludes.

Volume one of the series will be aired on Thursday, with the second installment arriving on the streaming service next week.

Netflix released the first trailer last week, coinciding with Harry’s brother William’s first trip to the US as Prince of Wales and heir to the throne.

That minute-long teaser featured intimate photographs of the couple, interspersed with a clip of Harry saying: “No one sees what’s going on behind closed doors” and images of Meghan wiping her eyes.

The second trailer suggests that more direct accusations will be levelled against the family, along with criticisms about how it treats women who marry into it.

Clips of Princess Diana are accompanied by audio of her son Harry highlighting “the pain and suffering of women marrying into this institution, the feeding frenzy”.

Meghan then appears to accuse the family of failing to protect her, before Harry says “I was terrified, I didn’t want history to repeat itself.”

Diana died in 1997 in a high-speed car crash as her vehicle was followed by paparazzi.

The family is also braced for more revelations from Harry’s autobiography “Spare”, which is due out in January.

The timing could barely be worse for the family after William was last week forced to part ways with one of his godmothers after she used racially charged language to a black British woman at a palace reception.

Harry and Meghan, a mixed-race former television actor, cited racism in the royal household as one of the reasons for their acrimonious departure almost three years ago.