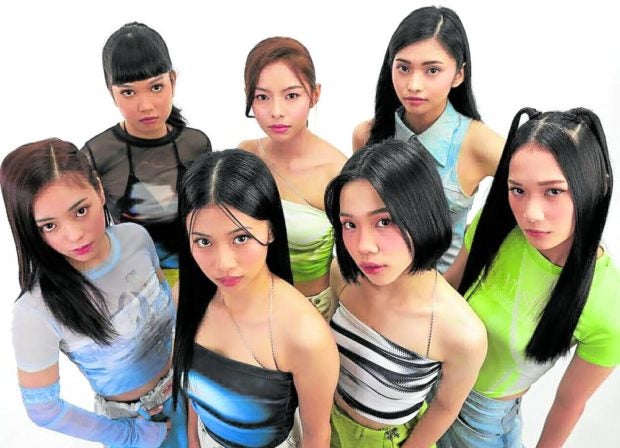 After years of intensive training, the rookie P-Pop girl group YGIG (You Go, I Go) finally made its debut last month with their catchy, hip-hop-laden single, “Shaba Shaba.”

The seven members—Alexei, Maeg, JM, Vien, Darlene, Hazelyn and Jewel—couldn’t contain their happiness and excitement as they delivered their first live performance and faced the show biz press at their recent launch. But they’re also fully aware that being in the spotlight and the public eye isn’t as easy as it seems.

“I don’t think anyone will be 100 percent ready to be in the public eye. But we were trained to deal with hardships. Each one of us in the group will try our best to prove that we won’t just give in to the pressure… More than the pressure, we look forward to showing the people what we’re capable of,” Maeg told the Inquirer.

“We have all been working hard for years and finally, we can show our supporters the fruits of our efforts. We’re determined to do our best in every performance,” said Darlene, who finished fourth in the first season of the reality talent contest “The Voice Kids” in 2014.

YGIG is the first girl group formed by the SBTown—an entertainment company headed by Geong Seong-han, or Tatang Robin as he’s fondly called in show biz circles. Given his track record, many fans have high expectations for his newest group.

“Yes, we feel some pressure, but it doesn’t come from our management. Through our training, we believe we can turn that into a positive thing. The more pressure there is, the more we’re inspired to do better and the more limitations we can break,” Maeg pointed out.

A song of empowerment

“Shaba Shaba,” released under Universal Records, is a word play on the phrase “Siya ba?” and is an upbeat dance tune about an otherwise confident girl who gets shy when confronted by a guy she likes.

“It has a hip-hop rhythm and a catchy melody. It’s about a confident girl who feels intimidated by the person she likes. And so, she casts a love spell on him,” Darlene said, adding that “Shaba Shaba” can also be interpreted as a song of empowerment. “It can also depict a girl showing determination and perseverance to achieve the best version of herself amid confusion and hardships.”

“Hearing the recorded version of our debut song was such a surreal experience,” Maeg said. “It was the first time we heard our voices through speakers. And we felt that all the years of training made everything worth it.”

The band trained under the SB Talent Camp under the supervision of Adie Hong. Apart from putting out attention-grabbing music and choreography, YGIG also hopes to form a strong connection with its audience and build a solid fan base—a crucial element in their bid for local, and potentially, international recognition.

“We devote eight to nine hours a day to training. We take care of our health and what we eat to make sure we’re in condition to train and perform well. It requires a lot of physical and mental strength, but we have to do it in order for us to go further in the future,” Alexei said. “Our training has us exploring different genres, sounds and concepts.”

While any of these girls could have pursued a solo career, they believe that being in a group has a lot of advantages especially for newbies like them.

“Some of us have done solo projects in the past. But I think the advantage of being in a group is that we have different strengths and skills that we can combine to make our performance even better,” Hazelyn said.

“Being in a group also means you can face hardships together,” Alexei pointed out. “It makes things lighter. When you’re solo, you carry all the burden. But when you’re in a group, you have people to share the happiness and sadness with. You experience the same ups and downs.”

JM added that she and the rest of the girls have already formed a deep bond, and their shared passion for performing and music help them move as a unit.

“We have all grown closer to each other because we have been training together for a long time. We get to know each other better through the different lessons we do because we learn about each other’s strengths and weaknesses,” she said. “But despite our differences, having one goal binds us together.”

Like other P-Pop groups, YGIG dreams of one day going global and promoting Filipino culture to the rest of the world.

“P-pop is growing globally, which is something we didn’t think would happen. But it’s happening. And YGIG wants to show a different side to our culture—that of the youth in particular,” Maeg said. “We want to express this through our lyrics, music and choreography. We hope we can continue down this path and be able to spread our culture globally.” INQ