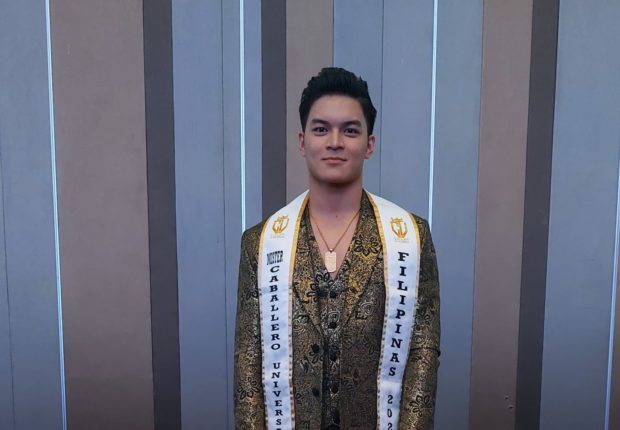 MANILA, Philippines—Just as many Filipinos are on the rush gearing up for the holiday season, the country’s representative to the 2022 Caballero Universal contest, Andre Cue, mesmerized the judges with his impressive physique and received the “Best Body” award in ceremonies staged at Club Teatro Luisela David in Caracas, Venezuela, on Dec. 1 (Dec. 2 in Manila).

The 19-year-old senior high school graduate from Cagayan de Oro City bested 14 other contenders for the distinction in the contest dominated by Latin American delegates. He also finished in the Top 10.

Kendall Jo from the United States won the competition, inheriting the title from Christian Naranjo Gomez from Spain, who was the contest’s first winner. Carlos Palacios from Nicaragua was proclaimed Vice King.

Cue is the first contender from Asia to participate in the annual competition. He was appointed in August by the Mister International Philippines (MIPH) organization to represent the country, just months after finishing fifth in the national competition.

When Cue was proclaimed fourth runner-up in the 2022 Mister International Philippines competition in June, he initially did not have any global pageant assignment. He was later appointed as the country’s representative to the Mister Teen International pageant in Laos slated for next year.

But when the national pageant organization acquired the Philippine license for Caballero Universal, it chose to send Cue to the Venezuela tilt. MIPH said it would wait for the global tilt’s result before deciding whether he would still participate in the Laos competition next year.

MIPH General Manager Ameer Gamama told the Inquirer in an online interview that the organization still has not made any final decision related to the Mister Teen International pageant.

“We are waiting for his parents’ confirmation because he is set to begin his studies at the De La Salle University in Manila next year,” he shared.