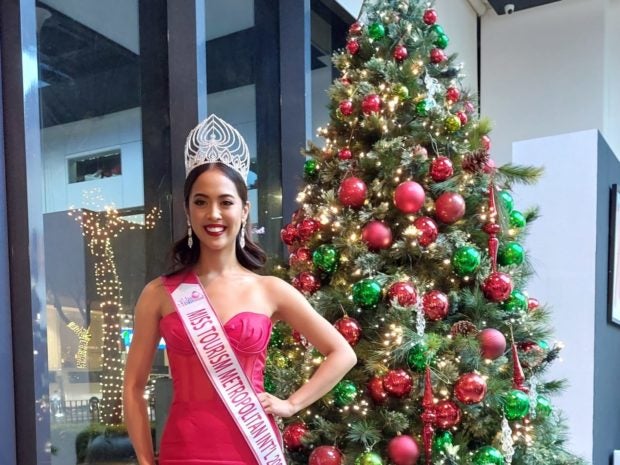 MANILA, Philippines—Maria Angelica Pantaliano captured the Miss Tourism Metropolitan International title at the 2022 Miss Tourism International pageant in Malaysia on Nov. 25, exactly a month before Christmas Day, and she offers her crown to the Filipino people as her early Christmas gift.

“Philippines, thank you very much for rallying behind me. Thank you for your prayers and support, I wouldn’t be here standing in front of you and achieving this crown without your help. So thank you very, very much,” she told the Inquirer in an interview at her victory press conference at the CWC Interiors at the Bonifacio Global City in Taguig City on Dec. 1.

The Cebuana lass also considers her crown as a gift to her mother Carmen, whose birthday fell on the day before the competition. “She wished for me to win the crown, not just for my dreams but also for her, because she wanted me to have a crown wherein people would really see my effort as an individual and people will also value me,” she shared.

Pantaliano said she plans to use her title to promote friendship and peace. “Peace is very important nowadays. If we could just communicate to one another then we can unite a divided nation,” she explained.

She was appointed by the Mutya ng Pilipinas organization to represent the Philippines in the Malaysia tilt just a few weeks before the competition. The national pageant is just currently underway so no candidate had been chosen yet at the time.

Pantaliano was a semifinalist in the 2019 pageant, the last time that a competition was held. The Mutya ng Pilipinas pageant took a break in 2020 and 2021 because of the COVID-19 pandemic.

Mutya ng Pilipinas President Cory Quirino told the Inquirer that she prays that people will find hope in Pantaliano’s triumph.

“That crown is a symbol not just of achievement but of hope, especially hope to a young aspiring beauty queen who has always wanted a crown on her head. Dreams do come true. If she did not win a major crown in 2019, look at what has happened with her life. A door opened, she accepted our invitation humbly but willingly and she came home a queen with a big crown,” Quirino shared.

She also said she has been telling the current crop of candidates to find inspiration in Pantaliano’s story. “That’s a message to all aspiring queens. Sometimes you think that you lost in a pageant, it might just only be a detour to a bigger crown,” Quirino said.

The Philippines is the most successful country in the Miss Tourism International pageant with five winners to date—Peachy Manzano in 2000, the late Rizzini Alexis Gomez in 2012, Angeli Dione Gomez in 2013, Jannie Loudette Alipo-on in 2017 and Cyrille Payumo in 2019.