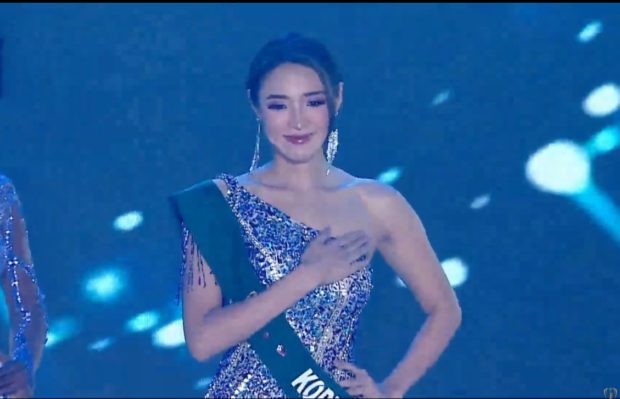 MANILA, Philippines — South Korea finally scored its first crown from one of the “Big 4” international pageants when Mina Sue Choi, an Australia-born and US-educated model, captured the Miss Earth title in ceremonies staged at the Cove Manila pool club of Okada Manila in Parañaque City on Nov. 29.

The communications student was the successor of Belizean Destiny Wagner, also the first woman from her country to capture a major international beauty title, in the global tilt’s 22nd edition beamed live to audiences served by Globovision in Latin America and the Caribbean, and was seen online worldwide through the pageant’s official Kumu, Facebook and YouTube accounts.

Mounted by Filipino organizer Carousel Productions, the annual Miss Earth competition is recognized in the international pageant community as one of the “Big 4” global tilts, in the same league as the Miss Universe, Miss World and Miss International pageants.

Choi was considered one of the early front-runners in the competition, amassing awards from different preliminary events. She continued her upward trajectory and impressed the judges with her answer to the final question.

The Korean model also connected her answer to the pageant’s thrust of environmental awareness. “When it comes to climate issues and other issues in this world, one has to be empathetic. You need to really see how the other person perceives this world. You need to understand their pain by being in their shoes.”

Mortlock was proclaimed Miss Earth Air while Aguilera, who finished in the Top 13 of the 2021 Miss World pageant, was hailed as Miss Earth Fire.

Nadeen Ayoub from Palestine came from behind to take one of the elemental titles and was crowned Miss Earth Water. The Philippines’ Jenny Ramp finished in the Top 20.

This is the first time in three years that the Miss Earth pageant was able to mount a physical staging of the competition, after conducting virtual editions in 2020 and 2021 because of the COVID-19 pandemic.

Before the recently-concluded edition, the last physical installment of the pageant was in 2019, also held at Cove Manila, with 85 aspirants. There, Nellys Pimentel became the first representative from Puerto Rico to bring home the title.

This year topped the 2019 haul with 86 international delegates. Pimentel also returned to the Philippines to join the ladies in some of the pageant’s auxiliary events.