Lustre as Lyra in “Deleter”

What Nadine Lustre discovered while shooting her upcoming Metro Manila Film Festival (MMFF) entry, “Deleter,” is that the horror genre can be more taxing than the dramas she typically does.

“This is my first full-length horror movie and I never knew that it could be this tiring… I did one in the past, but it was only for a cameo role, so I didn’t have a lot of scenes. But here, I experienced it all. When the film reaches the climax and so many things are happening, you have to act tense all the time, your body has to be [on guard].”

“So I was like, ‘Mas nakakapagod pala mag-horror kaysa mag-drama,’” the 29-year-old star said at a press media conference for the movie.

Produced by Viva Films and directed by Mikhail Red, “Deleter” integrates elements of techno-horror and psychological thriller to tell the story of Lyra (Nadine), a content moderation office worker who’s tasked to filter disturbing imagery and other graphic content on social media.

She comes across as emotionally numb, which gives her colleagues and boss the impression that she’s exactly the kind of person the job needs. But deep inside, Lyra hides a past trauma that she hopes to delete from her life.

Because of the nature of the lead character’s job, the bulk of Nadine’s screen time involves only her and the computer screen in front of her. With no coactors to bounce off energy with, the challenge, therefore, is arousing the required emotions by herself.

“It’s tough because I didn’t have someone to exchange lines with. Screen ang iniiyakan ko most of the time. It’s hard to imagine that someone else is part of the scene. It’s all in your head. Your eyes don’t do much, because you don’t see anything, really. So I have to rely on inner monologues,” she related.

‘Out of my comfort zone’

“But I have always been imaginative since I was little. So I study the scene and try to picture it in my head—how to do the lines, how to move. I think it also helps that I love watching horror films, so I have references,” she added.

And because Lyra has a quiet and stoic presence, Nadine had to come up with other ways to express her fear and distress. “Lyra doesn’t talk much; her movements aren’t big. Her emotions just sort of leaks—from her fingers, her eyes. How you express fear and emotional breakdown is also very different here,” she said.

Does Nadine feel her performance is worthy of the MMFF best actress award? That’s far from her mind at the moment. What she only knows is that what she delivered in this film was something the viewers have yet to see.

“The people haven’t seen me in this way, which was why I was excited to do this project,” said Nadine, who was named Famas and Gawad Urian best actress in 2018 for her role in the movie “Never Not Love You.”

“I had to go out of my comfort zone,” she said.

It was Nadine’s first time working with Mikhail, who directed the award-winning film “Birdshot” and other genre thrillers, like “Eerie,” “Neomanila” and “Dead Kids.” “I’m so grateful we got to work together because many of his films have made a mark. All of my friends know him and talk about his work, so they were excited for me,” she said.

Nadine described Mikhail as a “collaborative” director with a clear, decisive vision. “That makes me easy to communicate with; he knows what he wants. Horror is tough, especially if you have to do big scenes repeatedly. But he and the team already know the output they want to achieve. The scenes were stressful, but our set wasn’t,” she related. 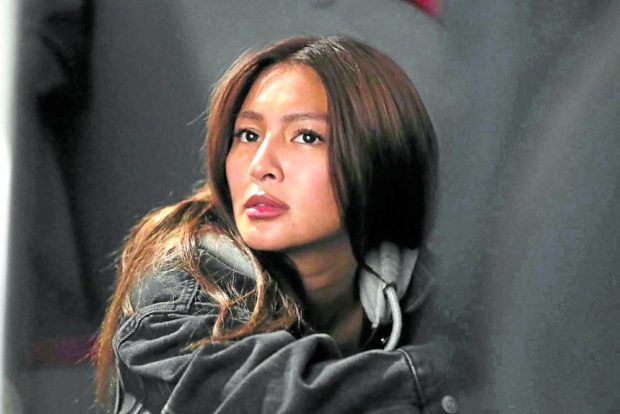 The actress believes that the subject “Deleter” tackles is timely and relevant. Yes, the internet and social media have become part of our everyday lives. But not everyone knows what goes on behind them, or that there are people whose actual job is to censor content online.

“Direk sent me documentaries to watch and it’s such an interesting subject. Social media is big. But there are still lots of things about it that we don’t know about,” she said of the movie, which also touches on distortion of truth and other issues related to technology and society amid the age of the internet.

Not to be taken lightly

While some people think that being a content moderator or “deleter” is a fun job, Nadine begs to disagree. “It’s a real job and one that shouldn’t be taken lightly. I found it so weird when the trailer came out and people said it was their dream job. Some of them were like, ‘I want to do this, where do I sign up?’” she related.

“But it’s something that affects your mental health. It can be traumatizing. Personally, seeing videos of accidents on Facebook is already scary for me,” she said. “But I’m sure that this movie gets to shed light on the kind of job content moderators do.”

“Deleter” is only Nadine’s second movie since the pandemic began. The past two years saw her making the most out of her free time by doing the things she loves. “I have learned to enjoy life and live life to the fullest. Life is hard but you have to go with the flow. I don’t stress myself out much. I feel chill lately. And I’m thankful for being able to travel again,” she said.

And now she can say she’s in a good spot in her life. “I guess I have learned how to better maneuver around my anxieties and things that stress me out,” she said.