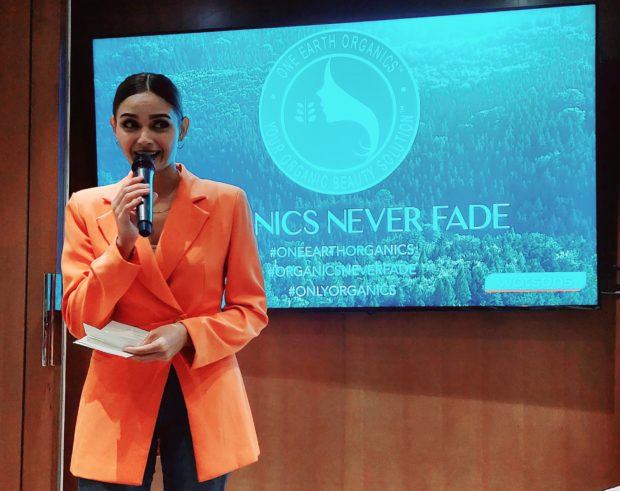 MANILA, Philippines—Miss Universe Philippines-Charity Pauline Amelinckx got too sick of being told her skin was “so dry” that she finally gave in to a multiple-step skin care routine.

“Makeup artists kept telling me that ‘your skin is too dry, the makeup would not last long,’ that’s when I started researching and asking my friends also about it,” she told the Inquirer at the sidelines of the “Organics Never Fade” event by local beauty brand One Earth Organics at Raffles Makati on Thursday, Nov. 17, which she also hosted.

She learned that makeup does not set properly on dry skin, so she upgraded her “just cleanse” regimen to a five-step routine. “I cleanse, I cleanse again because we’re a fan of double cleansing, and then toner, serum, moisturizer, and then sunscreen depending if I have to go out during the day,” said the Belgian-Filipino pageant veteran from Bohol.

Aside from hosting, Amelinckx also devotes time for her beauty queen duties, as well as her passion for free diving. And these different activities take a toll on her skin. “I’m only human,” she declares.

“I had a few pimples a few days ago because of the stress that my body was under, from going to different places for different kinds of activities. And of course, the environment also adds to that. Which is why I think it’s important to always go back to skincare at the end of the day, and at the beginning of every day,” she shared.

Amelinckx also said that if she only knew she would encounter a lot of skin concerns because of the things she has embarked on, she should have started paying attention to skin care as early as possible. “I guess I would also ask my mom to get into skin care sooner, so we could both be influencing each other to do that, and just go down with that journey together,” she added.

As one of the reigning queens of the Miss Universe Philippines pageant, Amelinckx went to Marantao town and Marawi City in Lanao del Sur earlier this month for a charity work with Save the Children Philippines, as well as to promote tourism.

She was joined by reigning Miss Universe Philippines Celeste Cortesi and first runner-up Annabelle McDonnell, who was just recently appointed as the Philippines’ representative to the inaugural edition of the Miss Charm pageant in Vietnam next year.  /ra