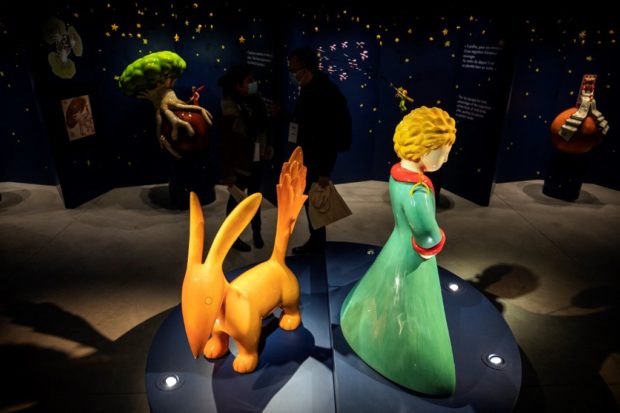 Nine-year-old Levi Asaf has an exuberant afro instead. But with his sparkling eyes, infectious smile and pint-sized charm, the Brazilian actor is Antoine de Saint-Exupery’s “extraordinary little fellow” to a T, in a groundbreaking new stage production of the beloved children’s book.

The musical starring Asaf, which opened in September in Sao Paulo, is the first production of “The Little Prince” in Brazil to cast a black actor in the title role—something the star says Saint-Exupery would have found “cool.”

“I think he would have liked it,” Asaf, a bubbling phenom from the northeastern state of Bahia, said of the late French aviator-author, who published his fanciful tale of the planet-hopping young prince in 1943.

“I think he would have thought it was really cool to see his little white prince with golden hair, now played by a boy with a black-power afro,” he told AFP.

Decked out in the Little Prince’s signature teal tunic, Asaf sings, dances and bounds through the production, from his famed introductory request to the pilot-narrator: “Please… draw me a sheep.”

It is a rewarding role for a child actor who has already been a victim of racism at his young age.

At school, classmates used to harass Asaf, calling him names such as “steel-wool head,” said his mother, Rosane Luiz Eloi.

“That was one of the less offensive remarks,” she said.

She said she herself finds inspiration in her son’s career, which started in 2018.

The following year, when he was 6, she was diagnosed with cancer.

“It was a battle to beat it. And I have to say, seeing him fight and overcome the way he has, it’s given me so much strength,” she said.

“I hope he’ll inspire other black children like him who need more opportunities.”

Asaf says the role is more than just an entry on his growing resume, which already includes modeling, commercials and a Netflix film.

“Respect my crown!” he added, laughing, with a dramatic toss of his afro.

In the sprawling country of 215 million people, which abolished slavery in 1888—the last in the Americas to do so—more than half the population is black or mixed-race.

But Brazilians of color are vastly under-represented in positions of power in politics, business and the media—a reality young audience members at “The Little Prince” are all too aware of.

“Seeing a nine-year-old boy play the starring role in a classic like this is super important.”

Another audience member, 33-year-old Naira Ribeiro, said: “I saw a lot of little eyes shining in the crowd. I think a lot of the kids identified” with Asaf’s performance.

To associate director Daniela Cury, the diversity of the cast is “the most important aspect of this work.”

The production features playful touches that match the poetry of the book, such as orange-hued planets and stars that come to life and dance.

For Asaf, it is a dream come true.

“I auditioned for ‘The Little Prince’ on my birthday. It’s been a great present,” he said.  /ra

Lessons from the timeless story of the small prince