The hugely entertaining, “sing- and dance-along” musical production helmed by Matt Strawski fuses live action and animation as it follows Josh and his canine best friend Blue (voiced by Traci Paige Johnson) on their star-making adventure to New York City.

Josh leaves the reassuring comfort of Storybook World when he gets the opportunity of a lifetime. He’s been invited by a famous theater director (BD Wong) to audition for Rainbow Puppy’s (Brianna Brian) upcoming Broadway musical.

But Josh’s excitement turns to consternation when he realizes that he had left his Handy Dandy notebook—which has the address of the audition venue—at home. Will three clues be enough to help Josh find his way to stardom?

The feature film is set to premiere on the Paramount+ streaming network on Friday, followed thereafter by a splashy rollout on Nickelodeon in other territories, including the Philippines.The movie is an even bigger deal for Josh because it allows the 33-year-old Fil-Am host to revisit his theater roots. It’s worth mentioning that before Josh bested 3,000 other hopefuls for his serendipitous hosting stint on “Blue’s Clues,” he had cut his performing chops on Broadway in musicals like Stephen Sondheim’s “Merrily We Roll Along” and Disney’s “Aladdin.” 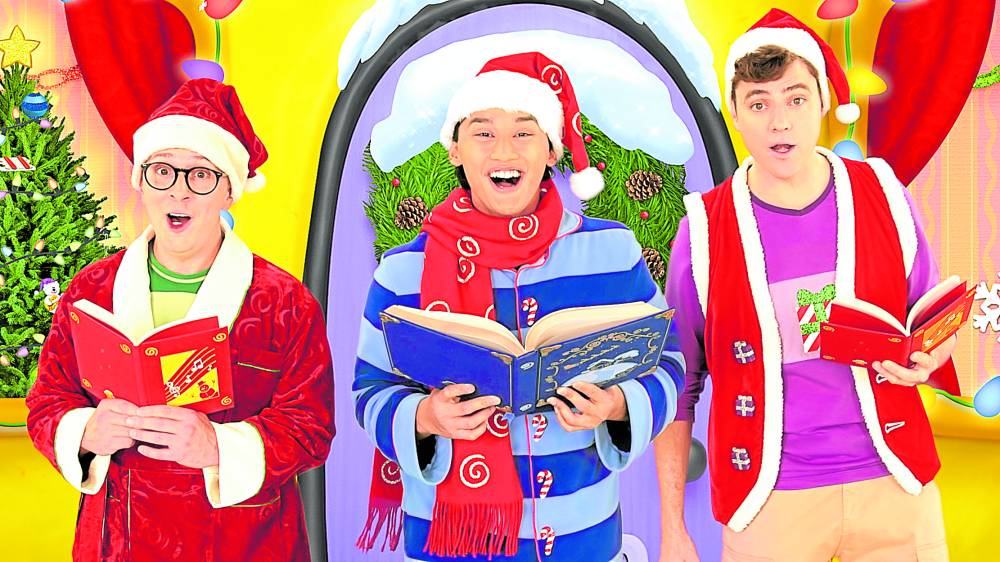 On our theatergoing trip to New York in 2013, we even saw Josh perform at the Public Theater in “Here Lies Love,” David Byrne and Fatboy Slim’s controversial musical about former Philippine first lady Imelda Marcos.

In our exclusive chat with Josh last Wednesday, he told us why he felt that the production’s setting and themes were too close to home for him.

He explained, “Angela Santomero, the show’s cocreator and writer of our movie, is a huge fan of musical theater. Her love for musicals, as well as my love for them, inspired her to write this story of Josh going to New York City for his big Broadway audition, which is something that I can personally relate to (laughs).

“So, that’s where the idea came from. And I hope that kids watching the movie will be able to see themselves in everything that we do. I really wanted BD Wong to portray the director because he was the one who inspired me to be an actor.

“I also want kids to see an Asian American director, especially in theater. It’s something that’s very, very rare on Broadway. So I hope that the new generation of kids will aspire not just to become actors, but also to become directors, producers and writers. And if they don’t see themselves there, perhaps they can become that people who will be able to open the door for others like them.”

Excerpts from our Q&A with Josh: 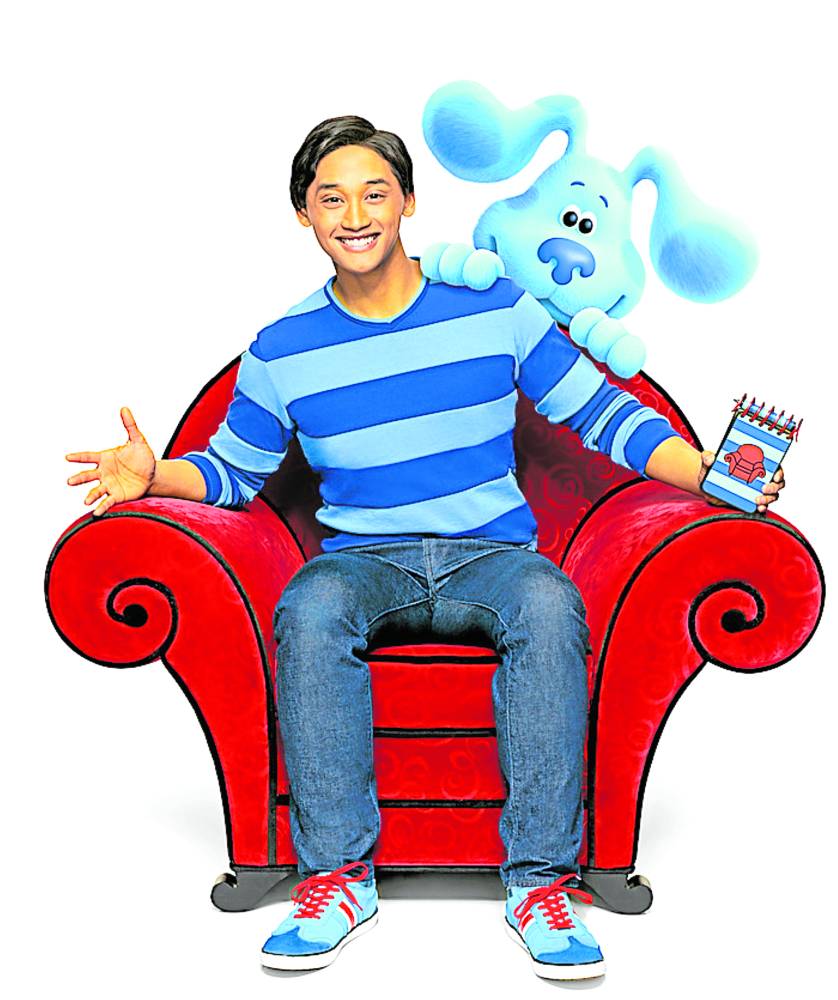 The show has undergone different iterations, with Steve Burns (1996-2002) and Donovan Patton (2002-2006) holding the hosting reins before you took over in 2019. What do you think is the secret behind “Blue’s Clues’” enduring popularity? The thing that helped set “Blue’s Clues” apart, particularly when it first aired in 1996, was that we took our cue from Fred Rogers and how he established [the format of] talking to kids [in his preschool show “Mr. Rogers’ Neighborhood,” which ran from 1968 to 2001].

Angela and [cocreator] Traci Paige Johnson took that concept a step further and waited for the kids to answer. I think that’s really important because we take kids very, very seriously in every stage of our production process.

We’re constantly checking in with our Early Childhood Development group, making sure that all the information we’re trying to convey is received. We’re always thinking if there’s a better way to do it.

We really care about kids and what they think and say. I’m speaking from experience as a former child, and as a current child … depending on the day or the moment I’m in (laughs). All children ever want is to be taken seriously and to be heard. That’s what the show does.

With all its great singing and catchy choreography, the feel-good movie is guaranteed to put a smile on viewers’ faces. It feels like you, Steve and Donovan make up significant segments of what I call the BCU (Blue’s Clues Universe). What do you think does each of you bring to the franchise? BCU … yeah (laughs)! To answer your question, I’ll tell you what they told me when I started doing the show. They said, “We cast you because we love what you bring to the table. So don’t ever feel like you have to replicate or copy anything that we’ve done in the past—and that’s true especially for this movie.”

Steve, Donovan and I have done that same thing. Steve is genuinely Steve, and Donovan is genuinely Joe. We all have a similar sense of humor, but we have different ways of going about it, whether it’s by way of physical comedy or sarcasm or my dumb brand of humor.

We all bring something different to the table, and each of it is very personal. And while we do play characters on this program, they’re also parts of who we are. We’re just trying to access that childlike wonder and joy that we hope kids will be feeling when they watch the show.

There’s a lot of singing and dancing in the movie. How long did it take you to rehearse them? And how does it feel for you to be able to merge your two passions—for theater and the TV show itself? It’s amazing. I didn’t know this at the time, but when I was doing “Aladdin,” I really loved my job and the people I worked with. But there was something tugging at me, telling me that I wanted something else and something more. I wanted to use all the skills that I had learned from all those talented and amazing people that I had worked with!

And so, when the TV show came along, and the people behind it really wanted me to utilize everything that I had learned along the way, it felt like I hit jackpot! This was what I was looking for all those years, and it’s for a show that helps kids and their families.

As far as the choreography in the movie is concerned, the only way that happened was because of our choreographers, Lindsey Blaufarb and Craig Hollamon and their assistant, Jessica Castro. They’re a force to reckon with, and if you love the music and dancing, they’re very much integral to this movie. 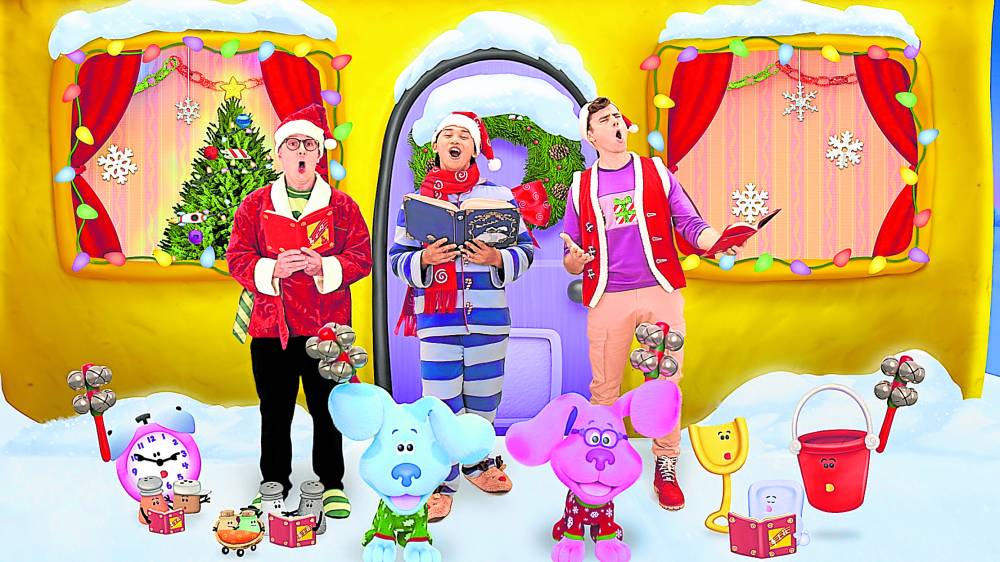 It couldn’t have been done with anyone else. The dancers in the movie are so incredibly talented and kind, and they pushed me to learn all of this amazing choreography in so short a time. I wish we had longer to prepare, just so I could hang out and continue to learn from them. They’re the best in the business.

You acted in musicals, on Broadway and off, before you were tapped to do “Blue’s Clues & You.” If you were given a chance to do a theater show now, which three productions immediately come to mind? Oh, man… I wish I could do everything (laughs)! But if I could pick three different roles in three different productions, one of shows would have to be “Hamilton.” I’d love to play any role in that one…

Well, Phillipa Soo, who played Eliza in “Hamilton,” has a funny cameo in “Blue’s Big City Adventure,” doesn’t she? That’s right (laughs). Maybe we can put on a different show, called “Phillipa Soo & You”…because she’s phenomenal. But yeah, I would love to play King George (portrayed by Jonathan Groff in the film version of the musical)—that would be a lot of fun!

My mentor Rob McClure is currently playing Seymour in “Little Shop of Horrors”… I’d also very much love to take a crack at that.

I think “Death of a Salesman” is also on Broadway right now. I would love to be in that one, too. I also want to do a play.

What’s your takeaway from “Blue’s Clues”? Oh, it taught me to work harder, be kind, and know that you can’t do anything without a community. In everything you do and in anything that you pursue, find those good people and help each other. Because there’s no way that I would be here if it weren’t for a family and a community that pushed me, helped me and supported me on my journey. And they continue to do so.

“Blue’s Big City Adventure” can be streamed exclusively on Paramount+ beginning Nov. 18 and will be rolled out later in international territories. In the Philippines, catch Josh on “Blue’s Clues & You!” at 7 a.m. daily on the Nick Jr. channel. INQ

Josh dela Cruz on being the fresh new face of ‘Blue’s Clues,’ his Filipino roots