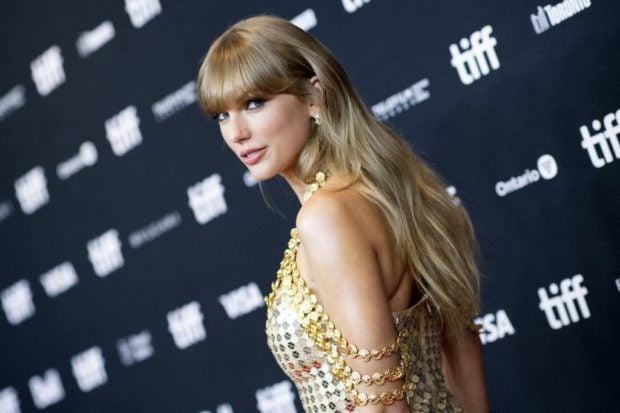 Taylor Swift made music history Monday, Oct. 31, becoming the first artist ever to simultaneously nab all 10 spots on the top US song chart after the release of her album “Midnights.”

It’s the first time in the chart’s 64-year history that a single artist has claimed the entire top 10, Billboard said.

The last artist to come close was Drake, who took nine of the coveted spots in September 2021.

“10 out of 10 of the Hot 100??? On my 10th album??? I AM IN SHAMBLES,” tweeted Swift, with a nod to her devoted fan base’s love of searching for hidden clues in her content including titles, numbers and dates.

Swift released the highly anticipated “Midnights”—her 10th studio album—on Oct. 21, which also debuted at the top of Billboard’s main albums chart with the biggest week for a release since Adele’s “25” in 2015.

The release of “Midnights” crashed Spotify for hours, but it still set a record as the most-streamed album in a day, according to the platform.

The album’s 13 songs tell “the story of 13 sleepless nights scattered throughout my life,” Swift said.

Together, they form “a full picture of the intensities of that mystifying, mad hour.”

The three songs off “Midnights” not in the top 10 also charted, as did seven more tracks from the extended “3am edition.”

Swift’s latest album sees her returning to pop and recalling some of her earliest hits after two pandemic albums, “Folklore” and “Evermore,” leaned into folk.

It also drops as the 32-year-old makes good on her vow to re-record her first six albums so she can control their rights–a process she was contractually allowed to begin in November 2020.

She has released two of them thus far: “Fearless” and “Red.” DC/RA