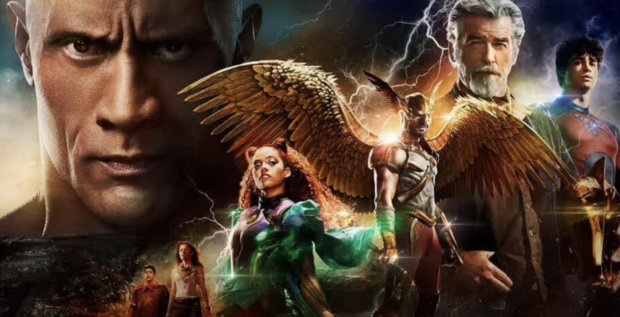 Dwayne Johnson, more popularly known as The Rock, has done something that others have a hard time doing, which is to expand the DCEU without going the route of a long origin story of each new superhero with the addition of the JSA (Justice Society of America), which is a superhero team that predates the Justice League of America by a few decades.

Even though this is a much smaller version of the JSA, it keeps three key members from the original line-up: Doctor Fate, Hawkman, and the second-generation Atom Smasher, as well as an entirely new addition from DC Comics in Cyclone. Why has no one in the past 12 years, ever since the DCEU started, thought of introducing the JSA in the movies? But The Rock didn’t want to wait any longer and decided the time was right, if not long overdue, for the long-awaited debut of DC Comics’ first superhero team.

I understand why The Rock wanted the JSA in ‘Black Adam’ because he portrays an anti-hero here, and you need his on-screen character to go up against a pure breed of superheroes. They have a clear sense of right and wrong, they are not mentally conflicted, and they do not have emotional issues that hinder them from performing their sworn duties as superheroes to protect the innocent and defenseless. In short, in more comic book lingo, the JSA represents the Golden Age of Comics, when good was good and there was no gray area at all. This is sorely missing in movies based on any comic book. An aspect brought back via Black Adam.

It is very important that with “Black Adam,” the DCEU is moving in the right direction, which signifies the introduction of new properties from DC Comics and can help bolster the already existing on-screen superheroes that are already in the DCEU. Often, the term DCEU is utilized, and finally, the last two acronyms, which are E and U, are happening, which are Extended and Universe. We are seeing these things happening right before our eyes because of ‘Black Adam’ and we can thank The Rock for that because he had the determination to do it. I mean, the guy waited for over 15 years to have his favorite all-time anti-hero, Black Adam, brought to the big screen and come to life. That is passion right there and a lot of patience on his part. For that alone, all the fans can tell that this matters to him, and because of that, the fans will respect him even more for it.

Indeed, time and time again, it is a proven fact in cinema and in the entertainment industry that if you have the right people in charge and calling the shots, you will get positive results, and most of all, you will gain the trust of the people to keep on supporting you. Here, it is The Rock creatively having a big say now in the DCEU, and for me, he is the best choice and, frankly speaking, the right person to continue to stir the DCEU in the right long-term direction.

I got to watch “Black Adam”, and the hype was fairly justified, and the promotion for this movie was accurate in surpassing the expectations of moviegoers. Especially if you are a fan, as I have been, of The Rock in movies, then this is a chance to see The Rock in a whole new light and to watch him perform an on-screen character that is meant for him. In several interviews with major American media outlets, The Rock has stated that as a child growing up, he would watch the “Super Friends,” and that is where he discovered the DC Comics anti-hero Black Adam, and from then on, he became a fan of Black Adam and became a DC Comics book collector and reader of various titles. The Rock is a true fan, and a knowledgeable one at that, of DC Comics.

There’s a lot to look forward to now that The Rock is Black Adam, and he’s helping the DCEU become the force it should have always been from the start. Finally, the DCEU has been saved.

Truly, The Rock did this for the fans and not his critics. Bravo!