Hugh Laurie on the lure of playing it ‘very smart’ or ‘idiotic’: All actors are gigantic fakes | Inquirer Entertainment

Hugh Laurie on the lure of playing it ‘very smart’ or ‘idiotic’: All actors are gigantic fakes 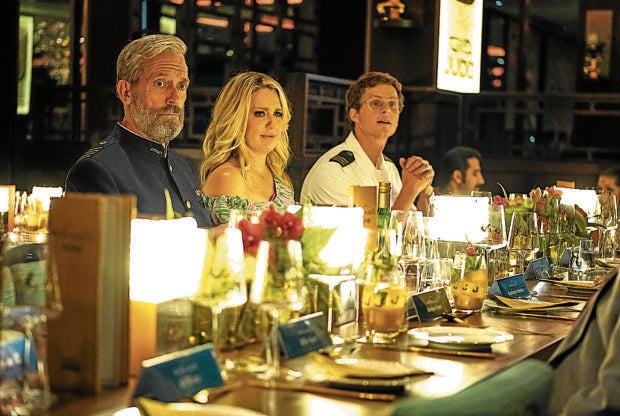 We’ve heard so much about the brilliance of Hugh Laurie when we interviewed comedian Josh Gad (Olaf in Disney’s animated blockbuster “Frozen,” Le Fou in the live-action adaptation of “Beauty and the Beast,” and Elder Arnold Cunningham in the Broadway musical “The Book of Mormons”) about the pilot season of HBO’s comedy series “Avenue 5” just before the pandemic began two years ago.

In that interview, Josh said he was envious of Hugh’s multifaceted skills, calling his 63-year-old British costar “the single most perfect specimen of a human being I’ve ever met in my entire life.” Josh explained, “Hugh makes everything look easy and effortless. He’s a man of all trades, while I’m just a man of one-and-a-half trades.”

We told Hugh (“House,” “The Night Manager,” “Veep”) how that fun and fascinating interview with Josh went when we talked to him last month to discuss the eight-part sophomore season of “Avenue 5,” which premieres on HBO Go on Tuesday.

Did it seem like Josh was intimidated by him on the set? Looking a little embarrassed by his costar’s high praise, Hugh said, “Aww, stop … no! It didn’t seem as if he was intimidated by me at all. I would have been happier if he’d been a little bit intimidated, but he wasn’t—and that was really quite annoying. 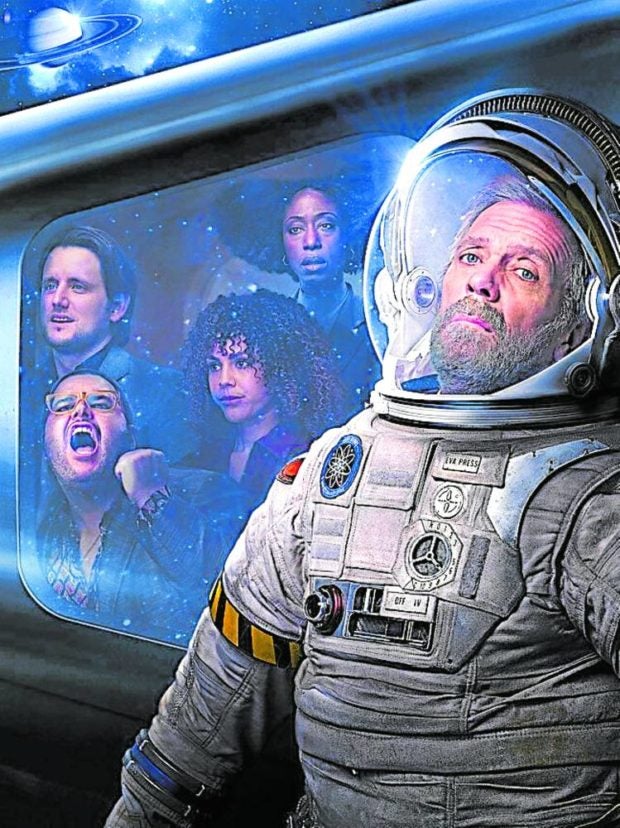 “He also happens to be an utterly delightful human being, as they all are—he’s a complete delight to spend time with. But from my point of view, I’d say that ‘Avenue 5’ is a happy place to go to work because we all get on very well, and we look forward to every day’s work.

“That doesn’t really stop us from complaining, because we complain all the time anyway. But it’s a very happy cast and crew—and Josh is very largely responsible for that. He does set a lot of the tone. I wish he wouldn’t, but he does. It’s actually kind of an insurrection in a way, but it’s in his nature.”

Indeed, just watching how members of “Avenue 5’s” delightful ensemble interact with each other sure looks like they’re having a blast bringing to life the quirks and gags thought up by the series’ Emmy-winning showrunner and creator Armando Iannucci (“Veep”).

“Avenue 5” follows a group of rich but clueless space tourists who gets stuck in outer space. Set 40 years in the future, it transports viewers to a world where space travel has become accessible to humans who can afford tour packages offered by the company of billionaire Herman Judd (Josh).

Unfortunately, not everything about the “topnotch” team of this space cruise ship is as it seems. Heading Avenue 5 set for the scheduled eight-week cruise around Saturn is Captain Ryan Clark (Hugh), who conceals the fact that he, well, isn’t a real astronaut!

Everything comes to a head when, on the third week of the trip, a “gravity flip” throws the course of the luxury ship’s orbit around Saturn into a tizzy and turns what was intended to be an eight-week cruise into a three-year, and later (in Season 2), eight-year journey! What to do? 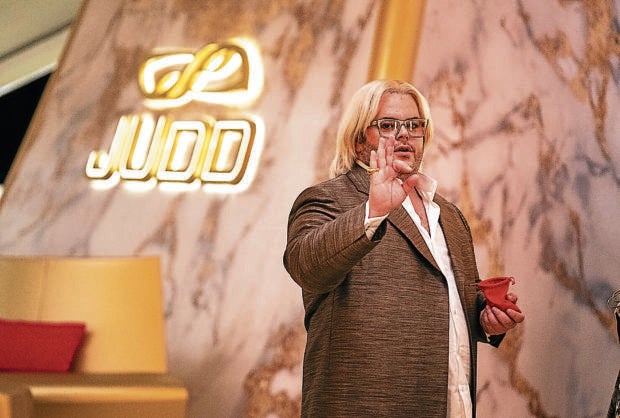 Our Q&A with Hugh:

As with Iannucci’s other shows, the series started to hit really close to home after it wrapped up Season 1 right before the pandemic shut the world down. Thereafter, we began to see more and more of the space tourism programs of Richard Branson (Virgin Galactic), Elon Musk (SpaceX) and Jeff Bezos (Blue Origin) in the news. What are your thoughts on this?

I did feel like reality was catching up on us (laughs). I remember I might have put out a tweet saying that we were starting the second season. And that it was a show that used to be set in the future, but it suddenly felt as if reality had been gaining on us … it may even have overtaken us in certain areas! We thought we were doing things that were about as crazy as it could possibly be. Then, you watch CNN and see that the world has actually become 10 percent crazier. So, we’re going to have to up our game, or the world is going to have to slow down.

Maybe the pandemic made it a little crazier. Or maybe we’re starting to come down and get our feet under us again. I certainly hope that’s true. But I think a bit of peace and calm would do us all some good after the craziness of the last few years.

After establishing yourself as a dramatic actor playing Dr. Gregory House in “House” to great acclaim, how do you feel about creating Captain Ryan Clark, a character who looks like a great new opportunity to be remembered as an actor?

I feel incredibly fortunate. Well, any actor should feel lucky to be playing any role at all. Never mind a role like Gregory House, which I felt was an incredible honor and blessing to portray in a show of that caliber.

I love playing idiots, and Captain Ryan is sort of an idiot. While House was not an idiot, he would at some days pretend to be an idiot in order to make fun of idiots. But he was really a very, very smart guy … much smarter than I am—and that was always a bit of a strain for me (laughs).

But I do I love the weaknesses of Captain Ryan’s character, and the fact that he’s faking it. He’s trying to make the best of bad situations. It’s a very different challenge, but it’s such an enjoyable one.

Given that I’m working alongside fantastically good actors, we’re all trying to encourage each other to do something a bit madder than we did the day before. And that’s a very exciting atmosphere to be working in. 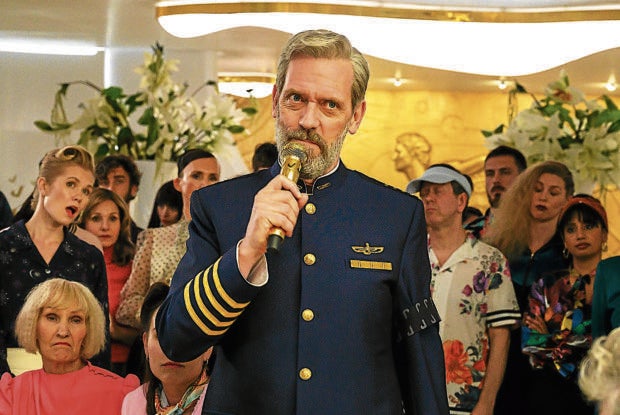 Your character in this sci-fi series pretends to know what to do even when he knows nothing about it. A few years ago, you said that when you were playing Dr. House, people were asking you about rashes or trying to get your opinion as a doctor. Do they still ask you about the stuff you do in your succeeding roles?

Well, they have not asked me how to fly a spaceship—that hasn’t happened yet (laughs). I do occasionally get asked for advice … it’s not that people actually seek my advice, but they’ll mention a medical condition, then they’ll say, “But of course, you know all about that.” And I would say, “No, I actually don’t. I’ve heard those words before, but I don’t know what you’re talking about” … just to sort of remind people [that I am not who I play].

But then again, that’s what actors do—all actors are gigantic fakes. We’re all faking it in some form or another and pretending to have the skills and knowledge that we don’t have. We’re pretending to be heroes when we’re actually cowards. That is what we do.

[Although there are things that] I do remember, because my father was actually a doctor, and my son is now a doctor. In between those two, I am the fake one. I am the version pretending to have the skill that they both have.

But maybe every man feels like a fake version of his own father, maybe we all feel like we don’t quite measure up to our parents. Perhaps that’s a common thing, but certainly, actors feel that a lot of the time.

What would you say is the most absurd idea that has been brought up to make this show?

I thought the ring of sh*t around the ship that would supposedly protect Avenue 5 from radiation was absurd (laughs). I thought we’d gone too far with that one. Then, we had someone offering a scientific explanation for why this might actually work. I took a lot of convincing … and I never really quite believed that one.

The funny thing is that, having spent all those years doing “House,” I didn’t believe in many of those cases either. But we had a whole line of doctors who said, “Well, it could theoretically happen … each one of these cases either has happened or could happen.” But of course, [medicine] is a known science.

In “Avenue 5,” we’re speculating about where science might be 20, 30, 40 years from now. We thought it would be at least 30 years, but now it seems to be getting closer. Because there have been three Herman Judds now who have sent rockets into space!

There are Judds everywhere in the world, apparently … but at first, we just thought he was an invention or a figment of imagination. As it turns out, there are now dozens of the character—and, generally, it’s a male. I think it’s a male impulse to want to somehow penetrate space with a gigantic rocket—you draw whatever conclusions you like from that statement (laughs). But yeah, that ring of sh*t was extreme.