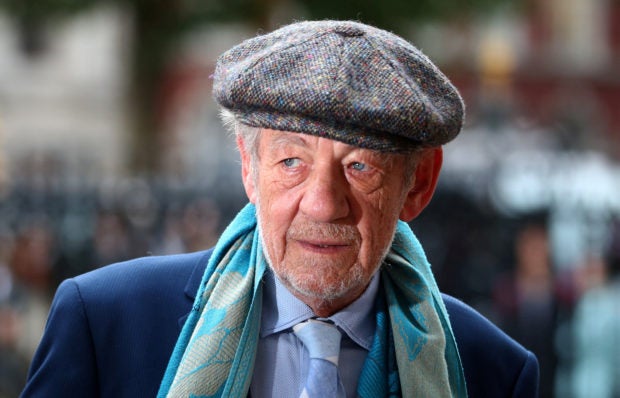 LONDON — Veteran actor Ian McKellen hopes to bring some laughs to audiences around Britain with a new extended pantomime production of “Mother Goose”.

The 83-year-old will play the titular character, who together with husband Vic, portrayed by comedian John Bishop, runs an animal sanctuary inside an abandoned department store that once belonged to retailer Debenhams.

Actress and presenter Mel Giedroyc plays a goose with a special gift, whose arrival changes their lives.

Like other pantomimes – classic Christmas productions in Britain – “Mother Goose” promises plenty of laughs for audiences of all ages. It will also tour the country and run until Easter.

“When I was a kid growing up, there were pantomimes that opened…the day after Christmas and ended on Easter Saturday…and that’s what we’re going to be doing,” McKellen told Reuters in a joint interview with Bishop on Monday.

“It’s a risk, we’ll see whether that still works but again when I was a kid, there were touring pantomimes which there aren’t really much these days, if any. So we’re going to back to what has made pantomime successful in the past. It’s finding the audience when they need us most and I think the winter months are probably it.”

While pantomimes are not new to McKellen, the “Lord of the Rings” and “X-Men” films actor is best known for performing William Shakespeare plays on stage.

“Whether it’s soldiers marching in the streets at a funeral, whether it’s a crowd at a football match all singing together, or whether it’s a family going to a pantomime and sitting next to another family… We care about the same things and that’s what pantomime underlines,” he said, referring to live entertainment connecting Britons.

“And to be allowed (together with Bishop) to be sort of master and mistress of ceremonies of this mayhem and fun, it’s better than playing King Lear…It’s not better, it’s different.”

“Mother Goose” kicks off in Brighton on December 3 before moving to London, where it will show until end-January. It will then go on tour around Britain as well perform in Dublin.

“Everybody knows that there’s a cost of living crisis, there’s a lot of negative news about,” Bishop said. “People need some escapism, they need some joy. But also they need it as a family.”

At 79, Ian McKellen says he has no plans to give up acting