At 79, Ian McKellen says he has no plans to give up acting | Inquirer Entertainment
Close
menu
search

At 79, Ian McKellen says he has no plans to give up acting 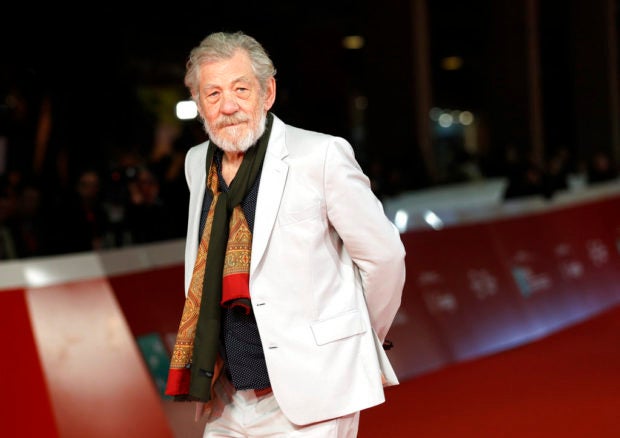 FILE – In this Nov. 1, 2017 file photo, actor Ian McKellen poses on the red carpet at the 12th edition of the Rome Film Fest, in Rome. McKellen is starring as King Lear in a London production that begins a four-month run in July. McKellen is getting a career and life retrospective through a new documentary called “McKellen: Playing The Part.” (AP Photo/Andrew Medichini, File)

LONDON — Sir Ian McKellen says his upcoming role as King Lear in an upcoming London production may be his last major Shakespeare role but he has no plans on retiring, as long as his knees and memory hold out.

Playing the tormented ruler is one of two projects prompting reflection from the 79-year-old star of the “X-Men” and “Lord of the Rings” film series.

“I’ll keep going as long as the knees keep going. And the mind and the memory are still there. Any day now they can begin to fade and then I’ll perhaps regret that I didn’t do stuff I could have done while I was fit. So being fit, here I am and if I’m not acting, what the hell I going to do sit at home,” McKellan told The Associated Press during a recent interview.

McKellen is playing King Lear in a production at London’s Duke of York Theatre starting in July. He is reprising a role he played for the Royal Shakespeare Co. a decade ago.

He says playing King Lear allows him to reflect on the journey of an old man, one that feels very personal to him.

“For me it’s worth re-exploring because nearly 80 myself, that’s King Lear’s age, I can concentrate in part on the fact that it’s an old man, it’s an old man’s journey, it’s a man who’s withdrawing from life. It’s a man whose mind is giving way, really and much else in his life is a confusion to him and I find that all too easy to relate to. So I take the part very personally.”

McKellen is also getting a career and life retrospective through a new documentary focused about him called “McKellan: Playing The Part”.

The documentary, which will be broadcast in the UK and Scandinavia on May 27 and will be in select U.S. theaters this summer, focuses not only on McKellen’s famous roles, but also his activism for gay rights.

McKellen said he was initially reluctant to do the project, but decided to go forward because of the involvement of director Joe Stephenson, and because the film would focus on topics he cares about.

“The trouble about talking about yourself is that, for me, is that I don’t feel I’m an expert. I don’t feel I’ve got a right to have an opinion, McKellen said.

“I do know about two things,” he said. “One is acting, because I’ve been doing it for so long and the other is about being gay, because as far as I know, I’ve been gay all my life, so I can with authority talk about those two subgroups.”

Stephenson said he wanted to show younger audiences, who might just be familiar with McKellen from his role as Gandalf in six films based on J.R.R. Tolkien’s Middle Earth books or as Magneto in the “X-Men” films, that there was more to the actor.

The two-time Oscar nominee said he never had aspirations to be a film star, but as a child he was fascinated by stage actors and their craft.

“When I was a young actor myself I loved being with the older actors, they had things to educate me about, tell me about. I would think, ‘One day I’ll be like you’ and now I am like them,” Mckellen said, adding that he doesn’t offer advice unsolicited. “It’s wonderful to be in an industry where young and old have equal responsibility on occasion and are sharing things together and the respect is mutual and not just dependent on your age.” MKH