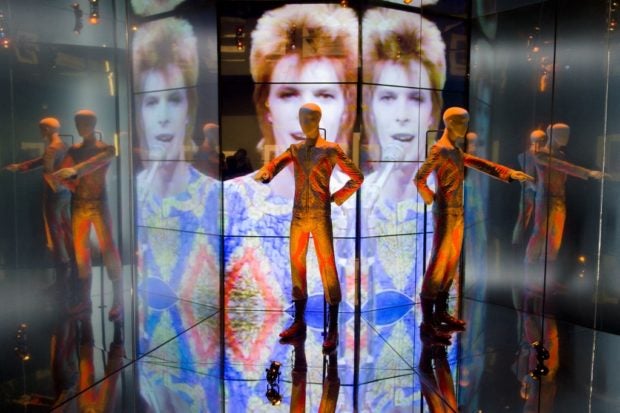 The “Starman” costume from David Bowie’s appearance on “Top of the Pops” in 1972 is displayed at the “David Bowie Is” exhibition at the Victoria and Albert museum in central London on March 20, 2013. Image: AFP/Leon Neal

David Bowie’s original handwritten lyrics for the pop classic “Starman,” part of an album that catapulted him to international stardom, on Tuesday sold at auction in Britain for £203,500 (P12.8 million).

Released as a single in 1972, the song about a Starman who would “like to come and meet us but he thinks he’d blow our minds” featured on the Ziggy Stardust concept album.

The handwritten lyrics sold for five times as much as the £40,000 (P2.5 million) estimate.

The winning bidder was Olivier Varenne, director of acquisitions and alliances and collections at the Museum of Old and New Art in Tasmania, on behalf of a private collector.

“We had almost unprecedented interest from around the world for this historic piece of memorabilia,” Paul Fairweather of Omega Auctions said.

“We’re very pleased with the incredible price achieved and are sure the lyrics will be rightly prized and treasured by the winning bidder,” Fairweather added.

The lyrics were previously on display as part of the Victoria and Albert Museum’s “David Bowie Is” collection. They had been owned by the same person since the 1980s.

The A4 page features handwritten amendments and edits by Bowie, including corrected spelling mistakes and additions.

The lyrics were sold as part of a David Bowie and glam rock sale on Tuesday.

Bowie can be heard telling his guitarist Mick Ronson, who died in 1993, that he has not finished singing the song when he tries to end the demo.