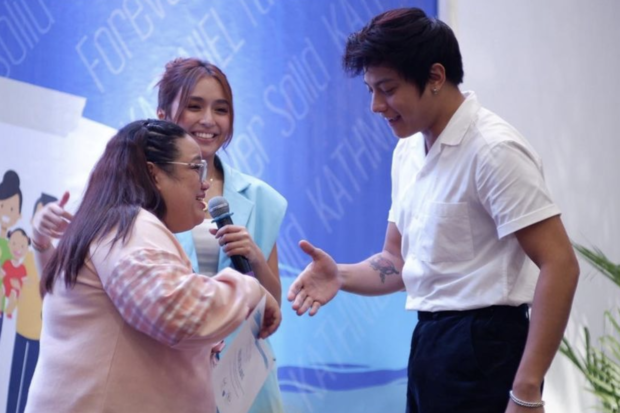 Kathryn Bernardo and Daniel Padilla held a thanksgiving event for their loyal fans as part of the 11th-anniversary celebration of their love team.

The celebrity couple can be seen posing for photos, shaking hands and giving certificates of appreciation to fans in the thanksgiving event, as seen on talent agency Star Magic’s Instagram page today, Sept. 27. The gathering was hosted by celebrity impersonator KaladKaren and radio host DJ JhaiHo.

While the event is for “solid fans,” Padilla also expressed appreciation to those who may not be actively following his and Bernardo’s careers, telling them he understands that everyone has to deal with their own lives as well, as seen on DJ JhaiHo’s Instagram post yesterday, Sept. 26.

For her part, Bernardo admitted she is at a loss for words to explain how grateful she is of her fans.

Meanwhile, Bernardo’s mother, Min, thanked KathNiel fans while showing a blank certificate of appreciation to fans who showed “extraordinary support” for the love team, as seen on her Instagram page, also yesterday.

(While we want all of you to be here because of your support for KathNiel, we need to adhere to safety protocols. Sharing with all of you this appreciation certificate because Team KathNiel, Team Kathryn and Team Daniel appreciate all of you.)

Bernardo and Padilla, who have been a real-life couple for 10 years, marked their love team’s 11th anniversary earlier this month.

The pair first worked together in the 2011 youth-oriented series “Growing Up,” then starred in various films and TV shows together, including “The Hows of Us,” “Princess and I,” “La Luna Sangre” and “Barcelona: A Love Untold,” among others.  /ra