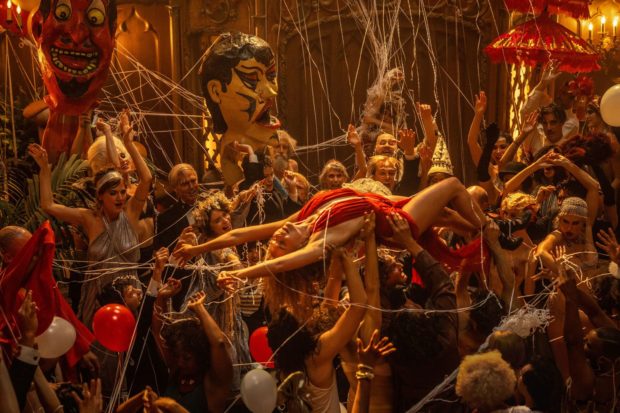 “La La Land” director Damien Chazelle on Monday gave the Toronto film festival a brief first look at “Babylon,” his eagerly awaited ode to the drug-fueled and hedonistic excesses of Hollywood in the 1920s.

“It was about capturing the spirit of that time, which is a lot more I’d say ‘Wild West’ than even our conceptions of the ‘Roaring Twenties,'” Chazelle told an audience.

“There was more excess, more drugs, more extreme living on all ends of the spectrum than I think a lot of people realize.”

The movie, which is still in production and has not been shown in full to audiences, is already being positioned by studio Paramount as another awards contender from Chazelle, who made the Oscar-winning “Whiplash” before his youngest-ever best director Academy Award for “La La Land.”

Chazelle said the film’s characters were each inspired by multiple real silent-era stars and moguls, although they are technically fictional.

Pitt plays an established movie star, shown in the trailer filming an epic Medieval battle scene, while Robbie is an aspiring and hard-partying actress.

“Babylon” will chart how the arrival of the “talkies” — movies with recorded dialog — and broader societal and technological changes transformed Los Angeles, a city which had only recently been built “from scratch” in the Californian desert.

“To do that, you need a certain kind of crazy person. It’s this sort of American Dream, crazed, manic vision, of ‘we are going to just conjure stuff up out of nothing,'” said Chazelle.

“I don’t think it’s a big surprise that the people who did that also did a lot of drugs and partied very hard. It’s all part of the tapestry,” he explained. “So I wanted to try to capture all of it — the highest highs, the lowest lows.”

“Humanity at its most glamorous and at its most animalistic and depraved. You kind of need all of it in order to actually explain what was happening in real life.”

“Babylon” will be released in limited theaters Christmas Day, just in time to be eligible for the Oscars in March, before a wider release in January.

It is one of several films celebrating the significance of cinema itself showcased at this year’s Toronto International Film Festival (TIFF).

On Saturday, Steven Spielberg received a raucous ovation for “The Fabelmans,” his semi-autobiographical movie about falling in love with filmmaking as child, which is already being tipped as an Oscars frontrunner.

Later Monday, “American Beauty” and “1917” director Sam Mendes will introduce “Empire of Light,” about a romance at a beautiful old cinema in 1980s England.