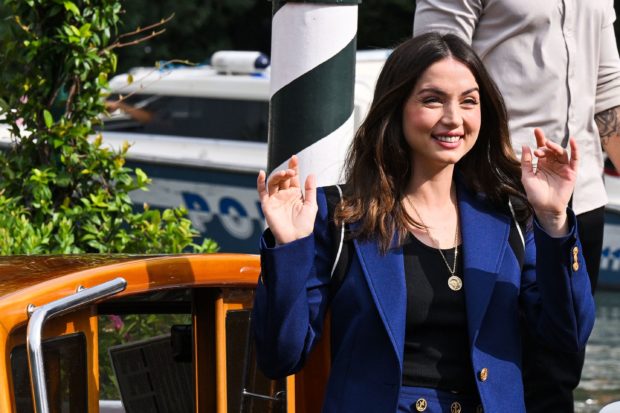 Ana de Armas’s journey from Cuban migrant to starring as Marilyn Monroe in “Blonde,” which gets its world premiere in Venice on Thursday, is the stuff of American Dream cliches.

Born in Cuba in 1988, Armas came to the United States in her twenties with barely a word of English, only to become one of the most sought-after actresses in Hollywood.

Her distinctive look and ass-kicking turns in James Bond film “No Time to Die” and Netflix blockbuster “The Gray Man” have made her a front-page fixture.

But “Blonde” is set to test her real acting chops.

Adapted from the semi-fictional biography by Joyce Carol Oates, it delves deep into the childhood trauma, sexual assault, and exploitation that lay behind the icon’s seductive, sexualized image.

“I’m a Cuban actress. In what world could I have imagined that this was going to happen? Never,” Armas told the Los Angeles Times of landing the role.

Armas was not an obvious choice, with grumblings online about her slight Cuban accent when the trailer was released this summer.

Monroe’s estate, though not involved in the film, has supported her performance, however, saying Armas “captures Marilyn’s glamour, humanity, and vulnerability.”

Armas spent nine months with a vocal coach trying to nail the unique intonation of the iconic actress.

Brad Pitt, who served as a producer on the film, told Entertainment Tonight: “It was 10 years in the making. It wasn’t until we found Ana that we could get it across the finish line.”

“She is phenomenal in it,” Pitt added. “That’s a tough dress to fill.”

From Cuba to LA

Armas spent her childhood and adolescence in Cuba.

She entered theater school at 14, starred in her first film two years later, and left to pursue a career in Madrid at 18, quickly landing a high-profile role in the TV show “El Internado.”

When she took the plunge and headed for Hollywood in 2006, she needed four months of intensive language classes to pick up English.

After a string of minor roles, her big break came with a part in 2017’s sci-fi sequel “Blade Runner 2049” alongside Ryan Gosling.

But it was her performance in the murder mystery “Knives Out” starring Daniel Craig that elevated her to leading lady status, earning her a Golden Globe nomination.

That led to work with A-list director Olivier Assayas (“The Wasp Network”), and her brief but scene-stealing role in “No Time to Die.”

But “Blonde” is another dimension of star-making vehicle.

Its director, Australian Andrew Dominik, is known for brutal but poetic biopics “Chopper” and “The Assassination of Jesse James by the Coward Robert Ford,” the latter earning Pitt a Best Actor award in Venice in 2007.

It has been a long wait for “Blonde,” which was reportedly finished in 2019 and delayed amid a stand-off between Dominik and Netflix over its lengthy running time and traumatic scenes.

Asked about his star’s accent, Dominik told the Los Angeles Times: “I had concerns, until I saw her act, then I forgot what I was supposed to be concerned about.”