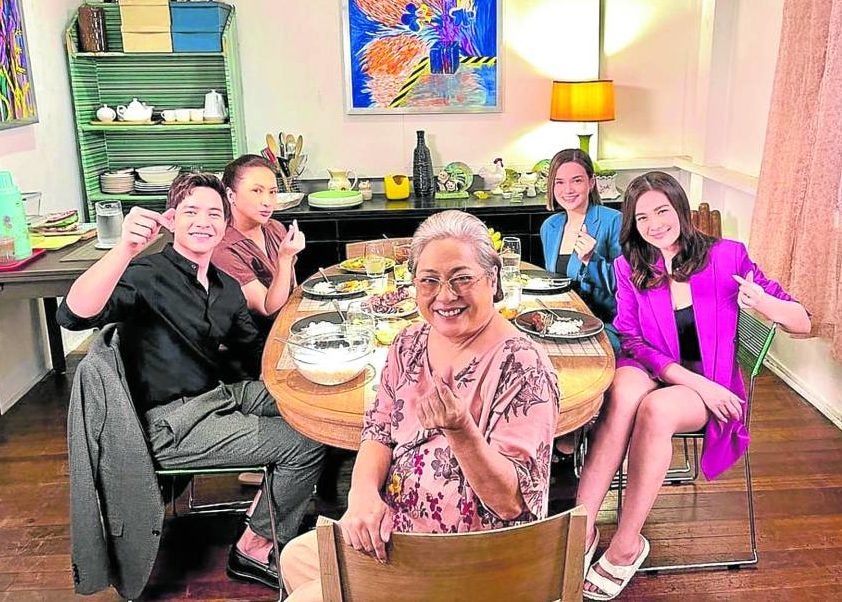 Prior to “Start-Up” Gina Alajar knew Bea Alonzo only through her films and other acting projects. But now that they have finally met and worked together, Gina couldn’t help but be impressed—not only by Bea’s acting talent—but also by her intelligence and kindness.

“It was my first time meeting and working with her. If she hadn’t transferred to GMA 7, we probably wouldn’t have this chance,” she said at a recent virtual conference. “Bea is such a kind kid; it’s obvious that she was raised well by her mother whom she’s really close to. She’s very intelligent and has a clear vision of how to live her life.”

Because they have a lot of scenes together, Gina and Bea got to know each other better. “In our conversations, she tells me that she still has a lot of films she wants to do. She’s interested in writing. Or eventually she may direct or produce,” Gina said. “She thinks clearly. She has plans and she knows what to do to achieve them.”

When it comes to acting, there’s “no doubt” about Bea’s talent, Gina said. “I have seen a couple of her films and I thought she was really good in ‘Four Sisters and a Wedding,’” said the veteran actress-director, who also commended Bea’s work ethic. “She comes to the set early and well-prepared. She already knows her lines,” she added. “She memorizes her lines quickly. Give her long lines and she will have them down pat. She would just give the script a quick glance and she’s off. Grabe—to think that she had a lot of scenes. And I can already feel her character and emotions even if we’re just rehearsing.”

Gina is a grandmother herself. And that helped build the chemistry and dynamics between Lola Joy and Dani. “At times I look at Bea as my apo. I think the lola-apo scenes had a very nice feel to them. Nag-swak kami… We were very happy doing our scenes. I think Bea and I nailed the relationship,” she said.

“I can relate to my character because we’re both hardworking. We love our grandchildren very much. We fight for our loved ones,” she added. “The difference is that I’m not as impulsive. I’m more cautious as a person.”

She’s also a fan of Bea’s teamup with Alden Richards, who plays Tristan Hernandez (Han Ji-pyeong or “Good Boy”). “They have a good chemistry. I watch them do their scenes and… kilig ako. That’s something to look forward to,” she said.

Despite being one of the industry’s most experienced and decorated actresses, Gina admitted that she still gets nervous and has her fair share of “insecurities.” In this case, the pressure comes from the fact that she’s playing a well-loved character.

“There’s already a point. The role is loved by many and in a way, she was the heart of the story. So, the pressure comes from there. I find myself wondering if I would be able to contribute the same way to the show,” she said. “You can’t be lax. It’s an adaptation so I’m always on my toes. I want to give something at par with and as enjoyable as the original.”

Gina, who started out as a child actress in the 1970s, has been in the industry for more than 50 years now. And she’s at a point in her career where she wants to deliver something new. “I want this to be different from what I have done in the past. That’s why I was overthinking [my performances],” she said.

In fact, she critiques her own performances and notes them down in her script. “I watched the show in 2020, but I checked it out again to see if what I was doing was right. I got nervous and asked our directors if we could reshoot some of them; I was worried that my reactions and expressions were wrong. I showed them my script and the scenes we have already finished—beside them were my comments, like ‘Palpak,’ ‘Pwede na,’” she related.

But Direk Jerry (Lopez Sineneng) told me not to worry too much. He said I should trust him. He was very reassuring and told me that if there’s anything wrong, he would be the one to ask for a reshoot. So that boosted my confidence,” Gina said.

“Later on, I realized that I shouldn’t be trapped in what the Korean version of the character was like. I had to do things on my own. I should go for what I feel and what I think Lola Joy should feel, because my intuition won’t let me down,” she said.