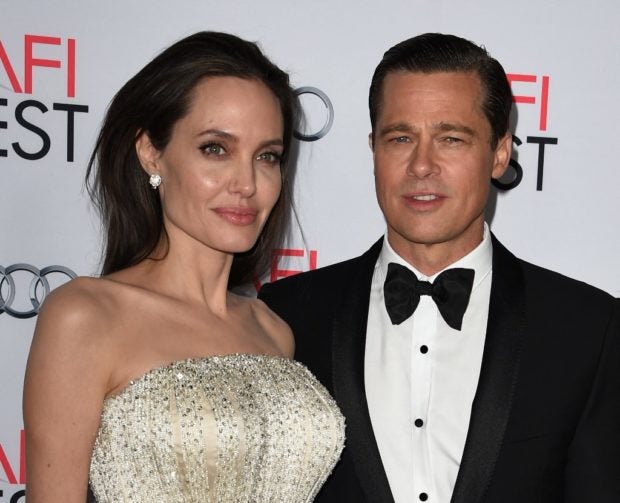 Angelina Jolie (left) and Brad Pitt arrive for the opening night gala premiere of Universal Pictures’ “By the Sea” during AFI FEST 2015 presented by Audi at the TCL Chinese Theatre in Hollywood, California, on Nov. 5, 2015. Image: AFP/Mark Ralston

Angelina Jolie has fired back at her ex-husband Brad Pitt with a countersuit over Chateau Miraval, the winery they previously co-owned.

The actress’ former company Nouvel is seeking $250 million (P14.29 billion) in damages from Pitt, as per court papers obtained by Page Six last Tuesday, Sept. 6. Nouvel is the company that Jolie founded to retain her stake in the winery, and has since sold to the Russian Stoli Group.

Jolie’s camp claimed that Pitt had launched a campaign to “seize control” of the French winery amid their ongoing divorce and custody battle, and to ensure “Jolie would never see a dime” of the business’ profit.

“In retaliation for the divorce and custody proceedings, Pitt embarked on a multi-faceted, years-long campaign to seize control of Chateau Miraval and appropriate the company’s assets for his benefit and that of his own companies and friends,” the lawsuit stated.

The suit alleged that since the divorce, Pitt and the directors of Chateau Miraval have “squandered tens of millions” of the winery’s money on “vanity projects” including a swimming pool worth more than a million dollars and a staircase at the chateau which was renovated four times “after he was unhappy with the first three attempts.”

The lawsuit stated that the winery’s funds were spent on the said projects despite Jolie and Nouvel’s objection.

The filing also alleged that Jolie negotiated with Pitt for months to sell her half of the winery, but that he demanded “onerous and irrelevant conditions” including a “hush clause” that prohibited Jolie from publicly speaking about the events leading to the end of their marriage.

Jolie, who sold her part of the winery to Stoli in October 2021, made her final offer to sell her interest in the estate on the same terms that Pitt proposed without the “hush clause,” but the actor ignored it, as per the court documents.

The filing added that Stoli was willing to work for Chateau Miraval, but Pitt refused to work with Stoli as “an equal partner” and was “unwilling to share control.”

Jolie and Pitt have been on a legal battle over Chateau Miraval for months. Last February, Pitt filed a lawsuit against Jolie for selling her stake in the French estate without his consent.

The actor then accused his ex-wife last June of seeking to “inflict harm” on him by selling her stake in the vineyard with “poisonous associations and intentions.”

Pitt and Jolie first got together after starring in the 2005 film “Mr. and Mrs. Smith” while Pitt was married to actress Jennifer Aniston.

Jolie filed for divorce from Pitt in 2016, which was finalized in 2019. The pair have six children together—three biological and three adopted.  /ra