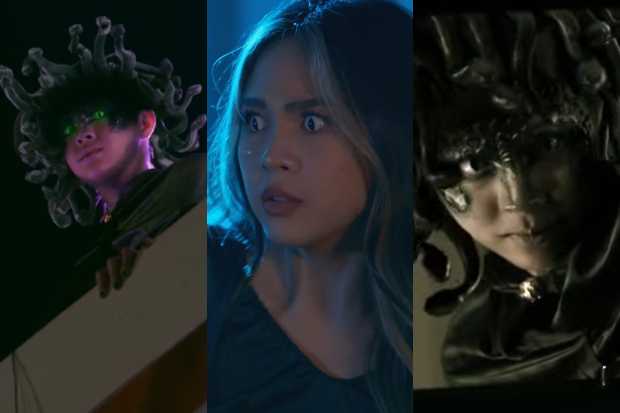 Valentina is now here! Janella Salvador has finally made her transformation into the snake-haired supervillain in “Mars Ravelo’s Darna”—but it appears her official costume is yet to be revealed.

The actress’ Valentina transformation happened during the episode of “Mars Ravelo’s Darna” yesterday, Sept. 1, wherein character Regina Vanguardia feels like her efforts to stop a suicide bomber were overshadowed by Darna (Jane De Leon) coming to the rescue.

Given her frustrations, pressure to please her father (Richard Quan) and fears over being framed for the death of an alleged smuggler, Regina listens to the voices in her head and changes into Valentina.

Salvador’s version of the villain has the character’s iconic snake eyes, scaly green skin and snakes as her hair while she was wrapped in a dark-colored cape.

Shortly after the episode ended, Salvador hinted that Valentina’s costume in the episode is not “final,” as per her Twitter post, also yesterday.

“Special announcement for the vadengs (gays): That wasn’t V’s final costume. Don’t worry. We [got you],” she told fans.

Salvador appears to be enjoying playing Valentina as she revealed the scene that made her “fall in love” with the character. She also posed in various outfits inspired by the supervillain for a recent magazine cover.

Aside from De Leon and Quan, Salvador stars in “Mars Ravelo’s Darna” alongside Joshua Garcia (Brian Robles) and Zaijian Jaranilla (Ding), among others.  /ra