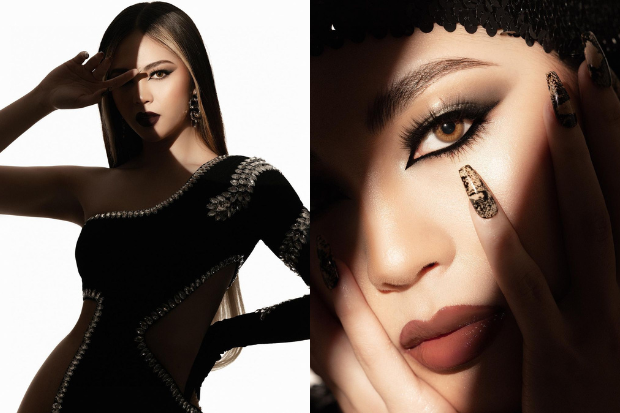 Janella Salvador channeled her snake-haired character Valentina in a recent fierce and sultry photo shoot for a  magazine cover.

Salvador wore a black breast plate and sheer skirt combo, a leather-studded top paired with a black tulle skirt, a black high-slit sequined cut-out gown, and a black cut-out catsuit with crystal embellishments that seemingly look like scales. She then completed the look with gold snake-inspired jewelry and snake printed nail art.

“[Janella Salvador], who’s long been a darling of Philippine showbiz, is portraying the role of a villain for the first time in her decade-long career. As this generation’s #Valentina, she says she’s inspired to tell the story of a ‘kontrabida (villain) with a heart,'” Barretto stated.

For her part, Salvador showed similar portraits from the shoot on her own Instagram page, also yesterday.

“Serving you big big trouble with [Metro Magazine],” she said.

Salvador currently stars as Valentina, whose alter ego is the vlogger-lawyer Regina Vanguardia, in the ABS-CBN superhero series “Mars Ravelo’s Darna.” She appears in it alongside Jane de Leon (Darna/Narda) and Joshua Garcia (Brian Robles), among others.  /ra