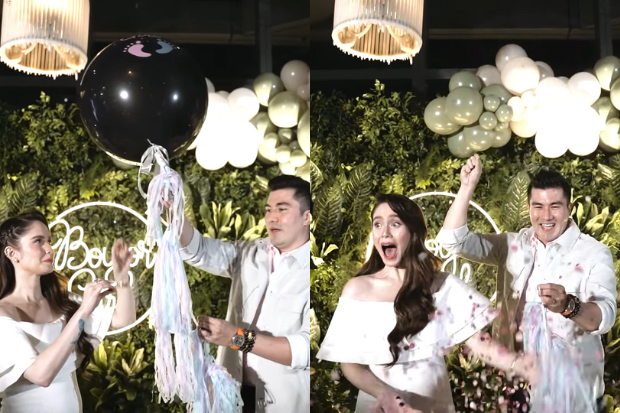 Jessy Mendiola and Luis Manzano have revealed that they are expecting a baby girl, weeks since they announced they were about to be parents.

The couple received congratulatory greetings from loved ones, including Manzano’s mother Vilma Santos, during the intimate event held at Manila House Private Members Club, as seen on the actress’ YouTube vlog yesterday, Aug. 25. Mendiola and Manzano can be seen popping a large balloon that contained pink confetti, indicating they are having a girl.

Mendiola, who was hoping for a boy, appeared to be surprised by this revelation, while Manzano, who wished to have a baby girl, danced upon finding out he is set to have a daughter.

(My friends are getting ready. I will not put doors in our house. It will just be walls so nobody can visit, nobody can enter… She will only get to see the sun once she is 62 years old.)

Meanwhile, Mendiola expressed gratefulness to those who have been supportive of them and their baby, who they refer to as Peanut.

The couple then asked fans for baby-name suggestions, since it is the next thing on their to-do list as they prepare for parenthood.

Mendiola and Manzano, who have been married since last year, revealed last Aug. 11 that they were expecting their first baby.

The couple recently opened up on their pregnancy journey so far. Mendiola said she had to adjust her lifestyle since getting pregnant, while the TV host admitted that being an expectant father pushed him to take on more projects and be more hardworking.  /ra