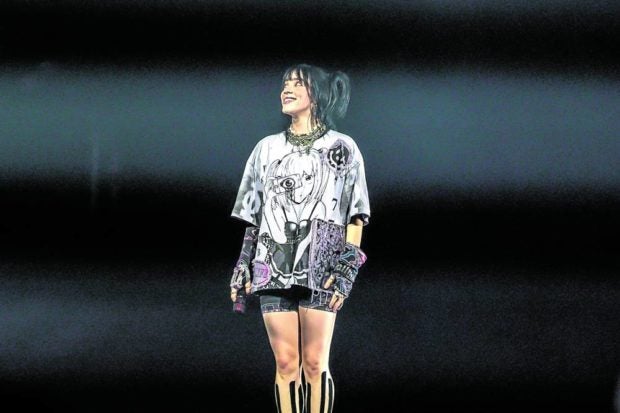 Two years after the pandemic-related cancelation of what should’ve been her first show in Manila, Billie Eilish finally emerged on the “other side of the world”—the SM Mall of Asia Arena, to be precise—to rumbling beats, pulsating white lights and the packed crowd’s deafening roars.

“It’s crazy to be on the other side of the world … and you’re here!” Billie told the her fans at the recent Manila stop of her “Happier than Ever” tour (Live Nation Philippines).

Her only request for the night was for everyone to “have fun.” The singer-songwriter wanted to see people “jumping, dancing, screaming,” and simply letting loose.

“Don’t worry about anything else,” said Billie, who wore a baggy “Death Note” shirt, cycling shorts and kinesiology tapes on her legs.

If there was anything the fans had to worry about, it was how they could keep up with the unfettered pop star’s boundless energy, as she blitzed through her set of more than 20 songs.

She pranced across the stage, her pigtail buns bobbing as she banged her head to the snarling “I Didn’t Change My Number.” She knelt and spun around in the hip-hop and electropop track “Therefore I Am.” The sultry, cabaret-esque “Strange Addiction” had her rolling on the stage, the lights bathing her in a red haze. And in “Bury a Friend,” she jumped up and down, clapping her hands overhead, before punctuating it with her signature pose—an impressive backbend that her hands almost touched the floor.

Billie may be just 20 years old, but she has already developed a keen sense of showmanship. With no choreographies to stick to, she commanded the stage with spontaneity, her body instinctively moving to every beat, distortion, tingle and rattle of her music. She knew when to hype the audience up or when to keep them still if she saw fit.

The American superstar, who, in recent years, has proven herself as one her generation’s most gifted artists, achieved international stardom and critical acclaim with her first studio album (“When We All Fall Asleep, Where Do We Go?”) alternative pop sound: Brooding, but deceptively melodic; her whispery cooing offset by dissonant, industrial synths and haunting ambient beats. 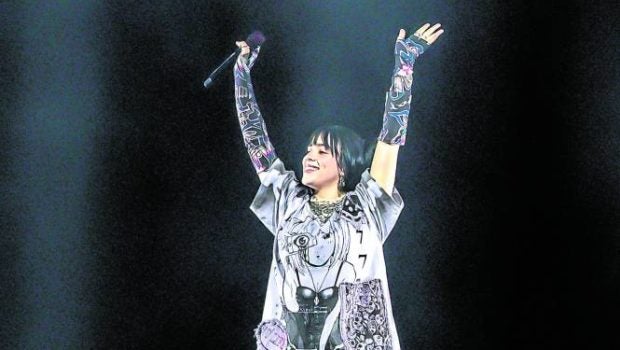 Her sophomore album, “Happier than Ever,” on the other hand, offers a more conventional sound with jazz-inspired electronic midtempos and gentle ballads. And the confluence of the two albums in this show provided a stylistic balance. While the audience did get their fix of thumping and visually delirious productions, there was also room for more subdued moments that highlighted Billie’s vocals, as in the sensual “Billie Bossa Nova,” which had her sashaying on the stage with pride flag draped on her shoulder.

There was also the barebones folk-acoustic ballad “Your Power,” which she performed on the guitar with her brother and creative collaborator, Finneas O’Connell. “This is my brother, my best friend in the world and the smartest person I know,” Billie told the crowd. “And we make everything together and I’m so lucky to have him in my life and on tour with me.”

They then proceeded with the new single, “The 30th”—another minimalist acoustic ballad—which saw its first live performance in this show. “We have never done this one live before. Please bear with me, because it’s a very hard song to sing, so I’m going to try my best,” she said. Toward the end of the show, she implored the crowd to think about the things and people they’re grateful for. “Think about the people who make you feel good and comfortable … Take a second to be aware of how lucky we are,” said Billie, who also expressed how proud she is of everyone. “I just want us to be happy that we’re all here, breathing and together.”

Being with her fans, she said, never fails to make her feel loved. “I adore you and I appreciate you … You mean the world to me,” she said. INQ