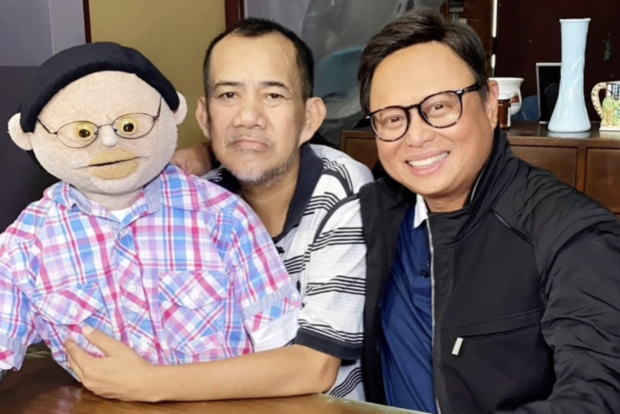 (When I heard the sad news about the death of Danilo Federez, or “Totong” to his friends, this Wednesday morning, it felt like a part of me was gone.)

Clavio gave the public a glimpse of several moments he had spent with Federez, who he described as professional and the “soul” of Arn-arn. He also recalled how Federez took good care of Arn-arn and treated the puppet with respect.

(Totong was Arn-arn’s soul. His right arm moved [Arn-arn’s] mouth every time he spoke. Totong’s job as a puppeteer was not a joke. He would kneel for hours without complaint.)

Clavio then recounted his visit to Federez’s home back in 2019, when they had been apart for a long time due to the latter’s health issues. He noted that at the time, Federez’s movements and health had changed a lot, but the puppeteer tried to convince Clavio to allow him to go back to work.

(I told him, once he was given clearance by his doctor, he could immediately get back to work. But I knew it was unlikely to happen. At the time, I saw the blank expression in his eyes and I felt his extreme sadness.)

Clavio added that he saw in Federez a  “Kuya (brother)” that he never had since the latter served as a protector for him. Meanwhile, he sees Arn-arn as something that will only serve as a memory and “ulila na nilisan na ng kanyang ama (an orphan left by his father).”

Besides Clavio, fellow broadcaster Connie Sison and actor Jason Abalos were among those who sent their condolences to Federez’s family.

Federez died in his sleep in the early morning yesterday, as disclosed by his family and Clavio. Arn-arn served as Clavio’s sidekick in GMA Network’s morning show “Unang Hirit,” and was made to look like the broadcaster.

In 2017, Federez suffered health problems and had a stroke that led him to get hospitalized for months. Back then, he had difficulty talking, but expressed appreciation for the support he received from Clavio and his colleagues from “Unang Hirit.”  /ra

Arnold Clavio tests positive for COVID-19: Only way to fight is with positive thoughts