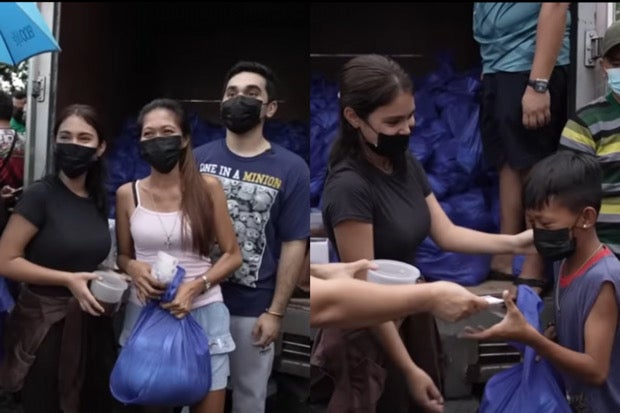 The actress-vlogger, who achieved the YouTube milestone last February, explained that she waited to move into her new house before celebrating as she wanted it to be the mark of a “good start.” She spoke about this in a vlog on her YouTube channel yesterday, Aug. 7.

Ivana along with her family — Fatima, Hash and Amira — and her house helpers prepared the food packs which contained rice, canned goods, Korean rice cake snacks and soap bars from her skincare brand. Aside from the goods, Ivana also distributed a serving of champorado.

Ivana initially had a target of giving away 15,000 packs but they were only able to produce 8,000 due to difficulties in preparing the food. She then thanked her fans and stressed that such activity is her way of giving back for all their support.

(Thank you so much to all of you for watching us, supporting, loving and subscribing to us. I am so blessed that you are all there [to support me]. I will give back all the blessings we receive from you, along with the love and support you give our family.)

Meanwhile, Ivana spent nearly P300,000 last May as she treated her family, staff and a random stranger to a shopping spree by doing the “buying everything you can carry” challenge. She also earlier granted her house helper’s dream by treating her to a nose plastic surgery at celebrity doctor Vicki Belo’s clinic. JB

Read Next
Jaya, family safe after house burned down in US
EDITORS' PICK
Reignite your passion with the vivo Y35
Karding damage to infrastructure at P23M
UNFPA Philippines Career Opportunities
Sierra Madre stands up to Karding, but needs protection vs the humans it saves
Bongbong Marcos says PH ‘open for business’ with new Clark Airport terminal
House energy committee chair Arroyo bats for cheap electricity
MOST READ
Badoy not with Office of the President, NTF-Elcac, under Marcos admin — solon
Angelica Panganiban ‘duguan, sugatang mom’ one week into breastfeeding
Maja Salvador to star in new ABS-CBN TV series with Richard Gutierrez
Kris Aquino offers help for Lolit Solis’ dialysis needs amid her own illnesses
Don't miss out on the latest news and information.