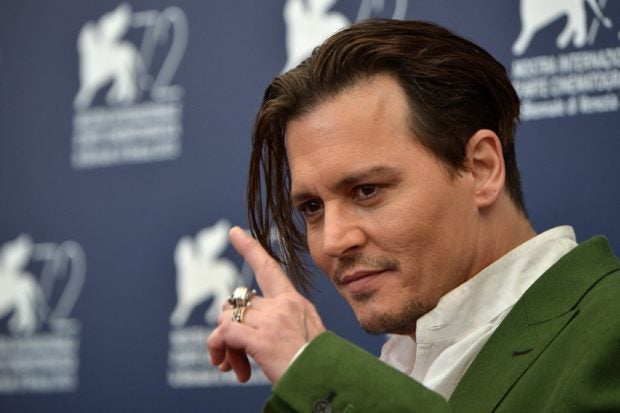 U.S. actor Johnny Depp poses during the photo call of the movie “Black Mass” presented out of competition at the 72nd Venice International Film Festival on Sept. 4, 2015 at Venice Lido. Image: AFP/Tiziana Fabi

Johnny Depp on Thursday sold a collection of prints he created of Hollywood and rock icons for around £3 million ($3.6 million) via a United Kingdom gallery chain.

The 59-year-old “Pirates of the Caribbean” star has spent millions on a bitter legal battle with his ex-wife, the 36-year-old actress Amber Heard.

Depp wrote on Instagram on Thursday morning that the prints were going on sale online at Castle Fine Art, which runs a network of U.K. galleries.

The art retailer posted a photo of Depp working on a portrait of singer Bob Dylan. It said that the collection of prints called “Friends & Heroes” was “a testament to those he has known well and others who have inspired him as a person.”

The gallery quoted Depp as saying: “My paintings surround my life, but I kept them to myself and limited myself. No one should ever limit themselves.”

The works depict Dylan, the late actress Elizabeth Taylor, actor Al Pacino and Rolling Stone Keith Richards. The gallery chain later posted a tweet saying that “Johnny Depp broke the internet” and its website had crashed due to demand.

Depp in June won an award of $10 million in a defamation case against Heard in the United States, while she won $2 million in damages after countersuing. Heard is appealing against the verdict of the jury trial, which was live-streamed to millions and featured lurid and intimate details about the former couple’s private lives.

Depp previously lost a libel case against the British tabloid The Sun in London in 2020 for calling him a “wife-beater.”

In another creative venture, the actor this month released an album with English rocker Jeff Beck. The record has been poorly reviewed by critics but broke into the top 40 in the U.K. JB

Japanese artist who created ‘Yu-Gi-Oh!’ found dead in the sea

Read Next
Why breastfeeding time incorporated into Coleen Garcia’s shooting schedule
EDITORS' PICK
House energy committee chair Arroyo bats for cheap electricity
Karding damage to infrastructure at P23M
Bongbong Marcos says PH ‘open for business’ with new Clark Airport terminal
Individuals affected by ‘Karding’ now over 157,000
Reignite your passion with the vivo Y35
Newbie gamers are in for a treat with the power-packed feature of vivo Y16
MOST READ
Angelica Panganiban ‘duguan, sugatang mom’ one week into breastfeeding
LPA enters PAR, may develop into tropical depression
Badoy not with Office of the President, NTF-Elcac, under Marcos admin — solon
Charges readied vs gov’t guard with P290-M deposits
Don't miss out on the latest news and information.