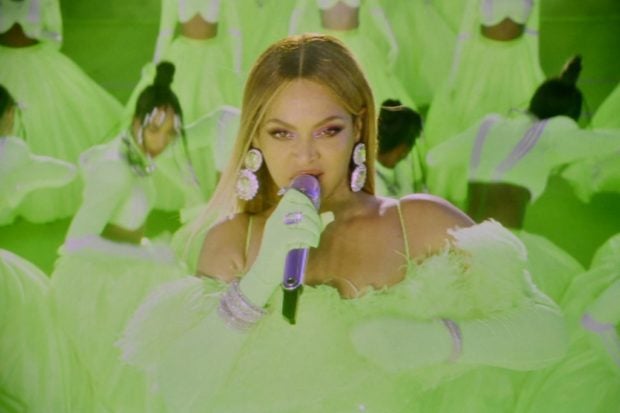 Beyonce performs during the 94th Oscars at the Dolby Theatre in Hollywood, California, on March 27, 2022. Image: AFP/Robyn Beck

Beyonce, the paradigm-shifting music royal whose art has long established her as one of entertainment’s seminal stars, on Friday released her hotly anticipated album “Renaissance,” a house-tinged dance record primed for its summer needle drop.

Six years after she shook the culture with her powerful visual album “Lemonade,” Beyonce’s seventh solo studio work is a pulsating, sweaty collection of club tracks aimed at liberating a world consumed by ennui.

Eminently danceable and rife with nods to disco and EDM history—Queen Bey interpolates Donna Summer and Giorgio Moroder along with James Brown and the archetypal synth line from “Show Me Love,” the 1990s house smash by Robin S—the 16-song album is poised to reign over the season.

Prior to releasing her opus, Beyonce had dropped “Break My Soul” to acclaim, setting the tone for her house revival that highlighted the Black, queer and working-class artists and communities who molded the electronic dance genre, which first developed in Chicago in the 1980s.

The megastar has indicated that “Renaissance” is but the first act of three, in a project she said she recorded over the course of three years during the pandemic.

“Creating this album allowed me a place to dream and to find escape during a scary time for the world,” said Beyonce on her website.

“It allowed me to feel free and adventurous in a time when little else was moving,” she continued. “My intention was to create a safe place, a place without judgment. A place to be free of perfectionism and overthinking […] A place to scream, release, feel freedom. It was a beautiful journey of exploration.”

In the weeks preceding the release of “Renaissance,” Beyonce teased the album with the steady stream of glossy, curated portraits of herself that over the past decade have become her signature.

But though she has received wide praise for keeping the world of music videos on the cutting edge, Beyonce put out her latest record sans visuals but they are promised at a later date.

In a statement, her label Parkwood Entertainment and Columbia Records lent insight into the decision, saying the artist “decided to lead without visuals giving fans the opportunity to be limitless in their expansive listening journey.”

Beyonce’s soaring vocals have their place on “Renaissance,” but it is the rhythmic, urgent call to the dance floor that stands out, with a tapestry of influences paying homage to pioneers of funk, soul, rap, house and disco.

“Unique / That’s what you are / Stilettos kicking vintage crystal off the bar,” she sings on “Alien Superstar,” which samples Right Said Fred’s “I’m Too Sexy” in a sonic ode to voguing, the stylized house dance that emerged from the Black LGBTQ ballroom culture of the 1960s.

On “Virgo’s Groove,” Beyonce gets raunchy with an unabashed sex anthem, adding a titular nod to her star sign—the Virgo turns 41 on Sept. 4.

Along with a smattering of deep house cuts as well as tributes to gospel, funk and soul, Beyonce’s collaborators on “Renaissance” include Nile Rodgers, Skrillex, Nigerian singer Tems, Grace Jones, Pharrell and, of course, her rap mogul husband Jay-Z.

Beyonce has long bucked music’s conventional wisdom and is credited with popularizing the surprise album drop.

She later made waves by releasing “Lemonade”—the groundbreaking work that chronicled her own emotional catharsis following infidelity within a generational and racial context—first on cable television, and limiting its streaming availability.

Since “Lemonade,” she’s released “Homecoming,” a live album and film featuring footage from her mythic 2018 Coachella performance, as well as the critically acclaimed song “Black Parade” which dropped amid mass protests ignited by the police murder of George Floyd.

That song saw the megastar, who first gained fame as a member of Destiny’s Child, become the winningest woman ever at the Grammys with 28, and the gala’s most decorated singer.

But for all her cultural clout and an indisputable throne in music’s pantheon, Beyonce’s songs have not seen the same commercial dominance as other contemporary global stars—her last No. 1 solo hit was 2008’s “Single Ladies (Put a Ring on It).”

That is poised to change with “Renaissance.”

The album’s release saw Queen Bey return to music business as usual, deploying pre-sales, a lead single drop, a track list and polished social media fodder. But it was not without a hitch—in the days prior to the official release, the album leaked online.

Late Friday Bey thanked her hive for waiting, and added that “I appreciate you for calling out anyone that was trying to sneak into the club early.”

“We are going to take our time and Enjoy the music,” the megastar told her fans. “I love you deep.” DC/RA