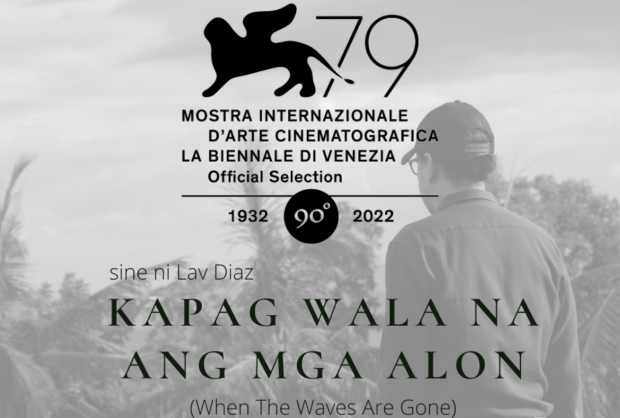 “Kapag Wala na ang mga Alon,” made by acclaimed filmmaker Lav Diaz and starring John Lloyd Cruz, is set to be screened at the 79th edition of the Venice Film Festival.

The film is part of the lineup for the festival’s Out of Competition section, as revealed by the festival organizers on its Facebook page yesterday, July 26 (Philippine time).

The festival participation of “Kapag Wala na ang mga Alon” was then announced via poster on its official Facebook page, also yesterday.

“Lav Diaz is back at the La Biennale di Venezia! His latest, ‘Kapag Wala Na Ang Mga Alon (When The Waves Are Gone)’ will be screened, out of competition at its 79th edition!” it stated.

It follows the story of one of the best investigators of the Philippines, Lt. Hermes Papauran, who witnessed “his institution’s being a party to a murderous anti-drug campaign, which is spearheaded by no less than the president of the country, Rodrigo Duterte.”

Lav Diaz is back at the La Biennale di Venezia!His latest, "Kapag Wala Na Ang Mga Alon (When The Waves Are Gone)” will…

It also marks Diaz’s return to the Venice Film Festival, two years after he won the Orizzonti Award for Best Director for his film “Lahi, Hayop” (Genus Pan).

Julianne Moore to preside over jury at Venice Film Festival