UK to host 2023 Eurovision as Ukraine bows out | Inquirer Entertainment

UK to host 2023 Eurovision as Ukraine bows out 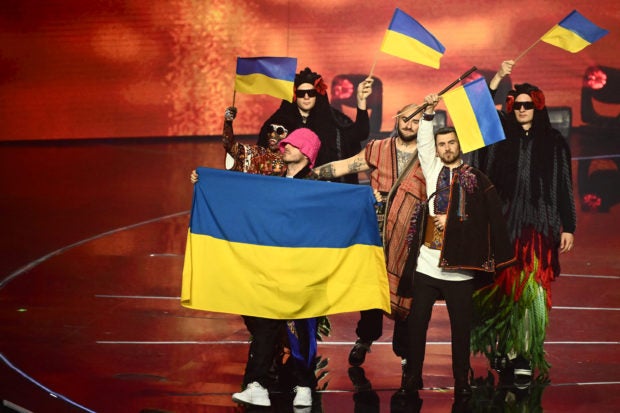 In this file photo taken on May 14, 2022, members of the band “Kalush Orchestra,” Oleh Psiuk, Tymofii Muzychuk, Ihor Didenchuk, Vitalii Duzhyk, Oleksandr Slobodianyk and Vlad Kurochka, representing Ukraine, arrive onstage during the presentation of participating finalists, during the final of the Eurovision Song contest 2022 at the Pala Alpitour venue in Turin. Image: AFP/Marco Bertorello

Britain said Monday it had reluctantly agreed to host next year’s Eurovision song contest, after organizers said there was no prospect of the pop extravaganza going ahead in war-torn Ukraine.

The BBC will now produce the world’s biggest live music event, taking in performers from across Europe and Central Asia as well as Israel and Australia, in a United Kingdom city yet to be determined.

Ukraine won this year’s contest, held in Italy, ahead of Britain’s entry in second place. For the past month, it had insisted it could host next year’s despite the Russian invasion.

But after the European Broadcasting Union (EBU) ruled that out on security grounds, the government in Kyiv acquiesced to a U.K.-hosted event with a strongly Ukrainian flavor.

Culture minister Oleksandr Tkachenko said that after “several rounds” of discussion, the EBU had given assurances of an “extremely high integration of Ukrainian context and presenters.”

British Prime Minister Boris Johnson said that in phone talks last week with President Volodymyr Zelensky, they “agreed that wherever Eurovision 2023 is held, it must celebrate the country and people of Ukraine.”

“As we are now hosts, the U.K. will honor that pledge directly — and put on a fantastic contest on behalf of our Ukrainian friends,” Johnson tweeted.

Last week President @ZelenskyyUa and I agreed that wherever Eurovision 2023 is held, it must celebrate the country and people of Ukraine.

As we are now hosts, the UK will honour that pledge directly – and put on a fantastic contest on behalf of our Ukrainian friends.

Johnson’s spokesman added it had been the soon-to-depart prime minister’s “strong wish” for Ukraine to host the 2023 edition, and found it “deeply regrettable” that was no longer possible.

In May, Ukrainian folk-rap group Kalush Orchestra won in Turin, on a wave of support for their country following Russia’s invasion.

Its lead singer Oleh Psiuk, whose bubblegum-pink bucket hat helped make him one of the breakout stars of the night, thanked Britain for stepping in.

“We hope Eurovision 2023 will have a Ukrainian flavor and celebrate our beautiful, unique culture,” he said in a statement to Britain’s PA news agency. “We, in turn, will make all efforts to help Ukraine win next year as well, so that Eurovision 2024 can take place in a peaceful country.”

By convention, the winning country hosts the kitsch celebration of music the following year. Britain last hosted it in 1998.

But last month, the EBU said Ukraine could not guarantee the safety of more than 10,000 people involved in the production and a further 30,000 fans expected to attend.

The broadcasting union stuck to its line despite protests from Zelensky’s government, and rejected one proposal to shift the contest to a border location within Ukraine, away from the frontlines.

The EBU said Ukraine was still guaranteed a place in the 2023 grand final along with the organization’s “top five” countries: Britain, France, Germany, Italy and Spain. The other finalists will be selected via national votes by viewers and judges, typically ranging from mainstream pop to the rather odd.

BBC director-general Tim Davie said it was “of great regret” that Ukraine could not host next year.

“The BBC is committed to making the event a true reflection of Ukrainian culture alongside showcasing the diversity of British music and creativity,” he said.

But the cash-strapped BBC also has to contend with footing a multi-million-euro bill for staging the show, unless the U.K. government stumps up extra support.

The broadcaster said it aimed to select a U.K. host venue by the autumn, in collaboration with the EBU. Whichever city wins will need to have an international airport, a sizable conference venue and thousands of hotel rooms.

London, Manchester and Sheffield all said they were ready to step in. Glasgow had previously expressed interest.