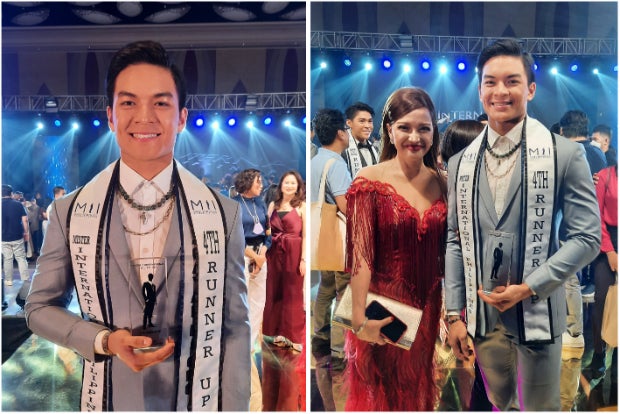 MANILA, Philippines — Three Filipino representatives to various international competitions were proclaimed at the culmination of the inaugural Mister International Philippines pageant in June, with two of the runners-up to main titleholder Myron Jude Ordillano getting their own shot at global crowns.

But another Filipino contender will get his own chance to compete for an international title when the national pageant organization announced that another one of the runners-up will represent the Philippines abroad.

The 18-year-old senior high school graduate from Xavier University-Ateneo de Cagayan will compete in the 2023 Mister Teen International contest, which will be staged in Laos next year.

The organization now handles four Filipino representatives to international competitions. Aside from Ordillano who will participate in the Mister International contest and Cue, first runner up Mark Avendaño will compete in the Mister Global pageant while second runner-up Michael Ver Comaling will join the Mister National Universe contest.

During the national competition, Cue amassed the most votes from members of local media in a preliminary event to secure the “Press Favorite” award. He was also one of the top 15 in the “Modern National Costume” contest. Thirty-three aspirants from around the country took part in the 2022 Mister International Philippines pageant.

Cue is the son of Mags Cue, proprietress of the “Mags” fashion label. He will try to give the Philippines a back-to-back win as Mister Teen International.

The Mister Teen International pageant that Cue will join is mounted by an organization based in Singapore, and is part of the twin competitions Mister and Miss Teen International. Reigning winners are both Filipinos — Vaughn Justice Zabala from Tacloban City and Carissa Neuel Finn Pono from Ormoc City, who were crowned in Bangkok, Thailand, last month.

Cue’s female counterpart in the 2023 edition has not been selected yet. JB