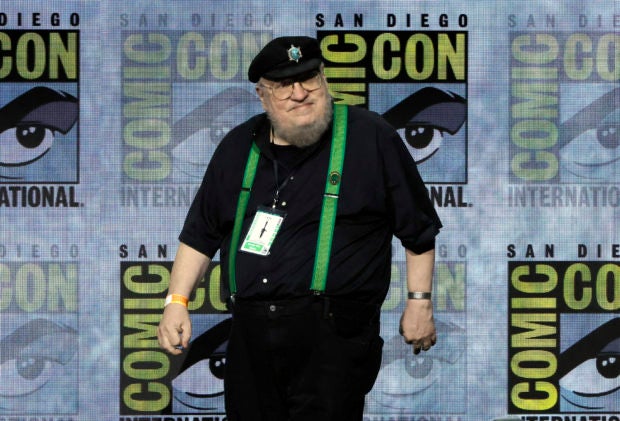 Three years on from “Game of Thrones,” author George R.R. Martin and the cast of new prequel “House of the Dragon” discussed the daunting challenge of following up HBO’s wildly popular series at Comic-Con on Saturday.

Martin’s series of fantasy books spawned the “Game of Thrones” series as well as several upcoming spin-offs. The first, out Aug. 21, will tell the history of the murderous reigning Targaryen family and their 17 dragons.

“It’s pretty exciting. You’re always nervous at the beginning, because these books, these characters are like my kids,” said Martin. “You wonder how they will be treated, will you recognize them when they come back to you?”

But, he added, “I’ve been very, very fortunate here… I’ve seen nine of the 10 episodes, and it’s pretty amazing.”

Set hundreds of years earlier, “House of the Dragon” depicts the glory days of the ancestors of popular “Thrones” characters, such as Daenerys Targaryen.

Paddy Considine plays the kindly King Viserys, while Matt Smith is cast as his ambitious brother Prince Daemon, and Emma D’Arcy his only child Princess Rhaenyra.

“This series begins at the absolute pinnacle of the dynasty, the height of the power, the wealth and influence,” said showrunner Ryan Condal.

“They have the most dragons that they’ll ever have, and it’s just before the bloom starts to come off the rose.”

Each of the 17 dragons will have its own distinctive look and character, he added.

There was little by way of new footage at the Comic-Con presentation, but expectations are high for “House of the Dragon.”

Over eight seasons, the original “Game of Thrones” became appointment viewing, spawned countless imitations and delivered 59 Emmys — a record for a drama at television’s equivalent of the Oscars.

But its final season was widely panned by fans and critics alike for failing to provide a satisfying conclusion.

Martin joked that the new series could spark a war among fans “next year.”

Olivia Cooke, who plays Alicent Hightower in the new series, said it felt “weird” trying to follow in the footsteps of “this behemoth.”

“There’s a massive pressure that we feel to give you guys what you want, but also make it different and to also put our own stamp on it,” she said. “We’re so grateful for what came before, which was so amazing, and we just hope that this has the same legacy.”

Martin has played down talk of a rivalry with “Lord of the Rings: The Rings of Power,” out from Amazon Prime in September.

But he said his world of Westeros was filled with characters containing both good and evil, noting that “we don’t have orcs.”

Comic-Con is taking place in-person and at full 130,000-strong capacity again for the first time in three years, after going online due to the pandemic.

Earlier on Saturday, Dwayne “The Rock” Johnson made a grand entrance to the convention center’s giant Hall H, appearing in full superhero costume raised above the stage amid smoke and thunder effects, to promote “Black Adam.”

The DC comic book adaptation about an ancient slave granted godlike powers who reawakens in the modern world comes out in October.

Warner is banking on the film boosting its DC superhero film universe, which has grossed billions without reaching the heights of rival and record-breaking Marvel films such as “Avengers: Endgame.”

“Maybe it’s time to feel a little bit of shift, get in there and disrupt things a little bit, and listen to the fans,” said Johnson.

Asked who would win in a fight between “Black Adam” and “Superman,” Johnson cryptically responded: “Pound for pound they’re pretty close… it probably all depends on who’s playing Superman… I’ll leave it at that!” AP/JB

TAGS: Comic-Con, Game of Thrones, Henry Cavill, House of the Dragon, Lord of the Rings