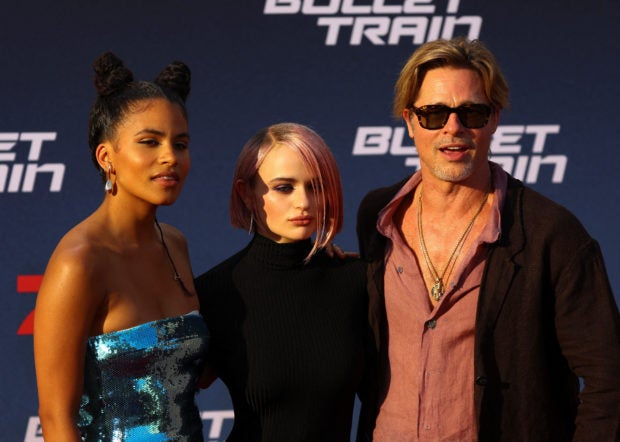 Pitt plays Ladybug, an unlucky assassin who wants to get a job done well before he finds himself battling a range of dangerous opponents, all with missions connected to his, on board the bullet train.

“Dave actually was my stunt man in [1998]… We met on ‘Fight Club’ and he trained me for the fight and it worked so well,” Pitt told a news conference in Berlin on Tuesday, about Leitch. “We went on with that pairing till about [2004] with a bunch of other films, and then he left me to do other things, and now it’s come back full circle so it’s really nice for me to have him as the boss now.”

The film features plenty of stunts and fight scenes as the assassins all seek to get hold of a briefcase.

“It’s always a balance of tone in a movie… I think creating a heightened world… allows us to get away with more things,” he said. “So we’re in this sort of comic book world, this escapist fantasy world and we can play with some of those darker ideas.”

The film’s cast and crew are promoting “Bullet Train” in Europe this week ahead of its global release in early August.

“I didn’t even realize it’s been like three years because we’ve been in lockdown and haven’t brought anything to a table in a while,” Pitt said of returning to the promotional trail. “It’s just nice. We all put everything we had into telling the story. It’s come together… and it’s really nice to now let it go, hopefully people will be enjoying it together in the theatre, laughing.” DC

Brad Pitt opens up on suffering from undiagnosed ‘face blindness’