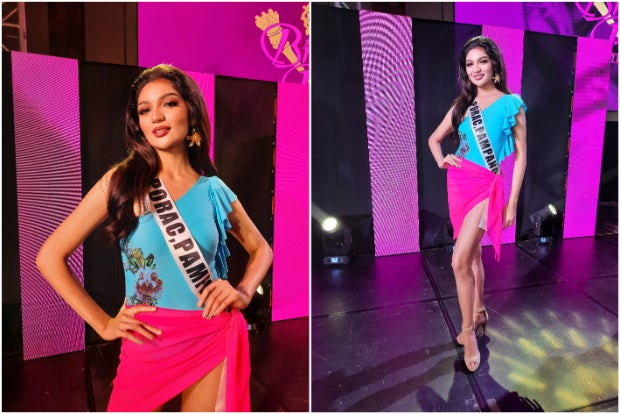 MANILA, Philippines — Cyrille Payumo gave the Philippines its fifth Miss Tourism International crown, the most for any country, towards the end of 2019 in ceremonies staged in Petaling Jaya, Malaysia. As the bookend to the Filipino quintet of titleholders in a 28-year-old international pageant, one would wonder why she still aspires to snag a national title.

“I have this feeling that I have ‘unfinished business’ because right after I won, there came the [COVID-19] pandemic. So I really was not able to feel I had a sufficient reign,” the model from Porac, Pampanga, told the Inquirer at the sidelines of the 2022 Bb. Pilipinas pageant’s press presentation held at the Novotel Manila Araneta City in Quezon City on July 5.

Payumo is among the 40 delegates competing in this year’s edition of Bb. Pilipinas.

She said just a few months after her coronation, protocols imposed because of the global health crisis prevented her and the organization from carrying out her reign. As a tourism ambassador, there really was nothing she could have done when the world ground to a halt. Borders were closed and tourism activities were discontinued.

“I’m not selfish to ever ask ‘why did it have to happen during my reign?’ But I do think I have unfinished business, and I know Bb. Pilipinas is a great opportunity to finish what I started. So I am here right now,” Payumo said. She shared with the Inquirer that it has been her dream to walk the Bb. Pilipinas stage since nine years ago.

“Who would not want that? It’s Bb. Pilipinas, one of the most prestigious pageants in our country,” Payumo added.

And if given another chance to wear another national crown, and represent the Philippines once again on the international arena, Payumo said she will use her title to be a voice.

“When you win an international crown, it no longer becomes just mere modeling. Your work is to inspire, influence, raise awareness, and be a relevant person,” Payumo shared.

Her participation in the Malaysia tilt in 2019 is an interesting twist of fate. She was proclaimed first runner-up in the 2019 Mutya ng Pilipinas pageant with no international assignment. But the crowned Mutya-Tourism International Tyra Rae Goldman was not qualified for the global competition for being part-foreigner.

The national organization then tapped the Kapampangan model to take Goldman’s place in Miss Tourism International, and the rest was history.

Now Payumo is eyeing a national crown all her own, and to get a celebratory coronation on stage.

The 2022 Bb. Pilipinas grand coronation night will be staged at the Smart Araneta Coliseum at the Araneta City in Quezon City on July 31. Catch it live on the Kapamilya Channel, Metro Channel, TV5, and A2Z, or watch it real-time via iWantTFC or the pageant’s official YouTube channel. JB